Children of Shree Deuti Basic School in Nepal will benefit from donations made at the Darlington Gurkha Band concert last week. 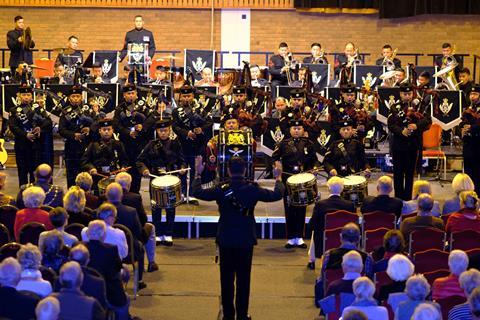 Generous support from concert-goers will be put towards a new classroom for children in Chamunda village in the Dailekh District, west Nepal. It will be built with our earthquake-resilient design, providing children with a safe place to learn.

Lieutenant Colonel Keith Ryding organised the concert for the 19th year in a row:

“At last year’s concert, we raised money to help a school build three new earthquake-resistant classrooms. This year, we have decided to support another school.”

Featuring the Band of the Brigade of Gurkhas and Gurkha Pipers, this year’s concert celebrated our 50th anniversary. The crowd marvelled at their eclectic mix of trendy western music and traditional Nepali tunes, which filled the Dolphin Centre in Darlington. They even performed an outstanding rendition of The Greatest Showman soundtrack:

4 facts about the Band of the Brigade of Gurkhas

1) Members of the band only learn to play their instruments once they join the Army.

2) During their first year in the band, members perform as dancers whilst they learn their instruments.

3) This concert in Darlington was the band’s 184th night away from their base.

4) The Gurkha in red uniform is called Yog Chongbang. He was a member of the band until his recent retirement from the regular Army.  After leaving the band, Yog has joined the Princess of Wales’s Royal Regiment (PWRR) as an Army Reservist and takes part in the Band BG programme occasionally.