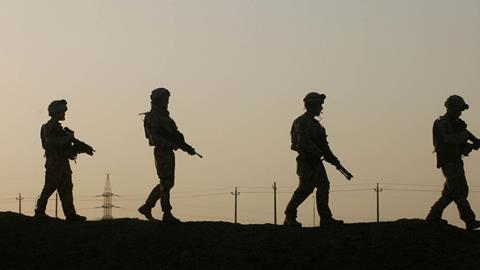 The Law Society has moved to defend solicitors amid ferocious media attacks on cases brought against the military.

The Telegraph quotes retired Colonel Tim Collins, who blames ‘parasitic lawyers’ for the allegations against soldiers, with investigators looking into more than 2,200 claims of abuse from the conflicts in Iraq and Afghanistan.

The Mail calls for an end to what it calls the ‘hounding’ of troops. The paper quotes solicitor Hilary Meredith, who is representing 200 soldiers in a judicial review against the Ministry of Defence, who pleads for more help for those soldiers being prosecuted.

The Law Society stressed that it will never condone the pursuit of vexatious claims and will work with the profession to end that practice where it exists. But it stressed citizens must be able to uphold their rights to pursue legitimate claims.

‘Military personnel should have the ability to pursue claims for wrongdoing and should also be held to account if their conduct breaches international laws,’ said Society president Robert Bourns.

‘Lawyers are also held to account if their actions violate their professional code of ethics or break the law. Each case must be based on merit, without prejudice.

‘Lawyers must not be hindered or intimidated in carrying out their professional duties and acting in the best interests of their clients within the law. They should not be identified with their clients or clients’ cases. This principle is set out in the United Nations Basic Principles on the Role of Lawyers.’

Bourns stressed that the right of access to justice should remain ‘no matter how the client or case may be perceived by the public, media or government’.

Today’s coverage follows a vow earlier this week from prime minister Theresa May to close down the ‘industry of vexatious allegations’ against British troops over claims of abuse.

But speaking on BBC Radio 4’s Today programme, Lt Col Nicholas Mercer, the former chief legal adviser for the army in Iraq, alluded to 326 Iraq Historic Allegations Team allegations settled by the government to date, at a cost of £20m.

‘Anyone who has fought the MoD knows they don’t pay out for nothing,’ said Mercer.

The two firms most closely associated with claims relating to the war in Iraq, Public Interest Lawyers and Leigh Day, both face misconduct charges at the Solicitors Disciplinary Tribunal.

Proceedings surrounding Birmingham-based PIL, which shut down at the end of August, are are currently classed as confidential. Three members of national firm Leigh Day will face a hearing at the SDT next year. Both firms deny wrongdoing.