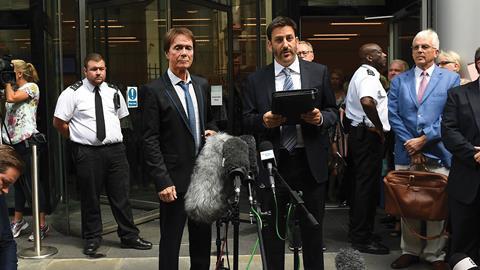 August roundup: What you may have missed

A selection of top stories from lawgazette.co.uk in August.

The BBC admitted that the way it reported the police raid on the home of Sir Cliff Richard would make it hard to persuade the Court of Appeal that the High Court was wrong to award the singer heavy damages for breach of privacy. Announcing that it will not seek leave to appeal the judgment in Sir Cliff Richard OBE v British Broadcasting Corporation, the BBC called on the government to clarify the balance between the rights to privacy and free expression.

Global accountancy giant EY laid down a significant marker in its expansion into legal services with the acquisition of Riverview Law, which markets itself as a fixed-fee provider for blue-chip clients with an emphasis on technology. No financial details were revealed. The firm said the acquisition helps give EY ‘first-mover advantage’ in legal managed services and establishes it as a ‘leading disruptor’ of legal services.

The deal marks another step in what has long been predicted would be the rise of the Big Four accountancy firms to rival – and possibly overtake – bigger law firms.

The controversial Quality Assurance Scheme for Advocates (QASA) has been formally consigned to the history books for barristers – though oversight regulator the Legal Services Board (LSB) has pledged to keep a watchful eye on advocacy standards.

In a notice published last month the LSB said it had ‘approved in full’ an application by the Bar Standards Board (BSB) to remove QASA rules from the BSB handbook. However, noting the BSB’s admission that regulatory intervention was still required to address poor advocacy, the LSB warned that it would hold the regulator to account to ensure that it provides a ‘robust and proportionate’ response to quality risks in advocacy.

A public consultation opened on long-awaited government proposals to create new offences of causing death or serious injury when cycling. A document published by the Department for Transport says that the proposed legislation would ‘achieve consistency between cyclists and drivers and parity of sentencing options where the outcome is death or serious injury’. The consultation document also seeks views on extending new cycling offences to both the road and other public places. It also considers whether any new cycling offences should carry minimum disqualification periods. The consultation closes on 5 November.

Six solicitors – including two-part-time judges – were among nine people who appeared at Southwark Crown Court in relation to allegedly fraudulent legal aid claims made for more than £12.6m. The plea and trial preparation hearing was adjourned until 12 October. No pleas were entered. All nine were granted unconditional bail.

Widespread concerns about deregulation of the solicitor profession must be taken into account and new rules rejected by the oversight regulator, the Law Society said as the Legal Services Board considers proposals to create different tiers of solicitor and reduce consumer protections. Society president Christina Blacklaws said: ‘The SRA appears to be pursuing a deregulatory agenda based on flawed premises and at the expense of consumers. The misguided proposals now being considered by the oversight regulator fail the litmus tests for regulation: they jeopardise the public interest and risk weakening the rule of law’ (see feature, p24).

A court has ruled that schools that exclude disabled children for challenging behaviour including a ‘tendency to physical abuse’ can no longer rely on a controversial exemption in the Equality Act’s regulations.

In C&C v The Governing Body of a School, Upper Tribunal judge Rowley concluded: ‘When construed in accordance with section 3 of the Human Rights Act 1998, section 4(1)(c) does not apply to children in education who have a recognised condition that is more likely to result in a tendency to physical abuse.’

Shanghai became the latest international business centre to open a commercial court. The Shanghai Financial Court will handle disputes of a minimum value of RMB100m (£11.4m) provided both parties are based in Shanghai, and half that figure if one party is not based in the city.

An experienced solicitor who head-butted a fellow parent during a children’s rugby match has been struck off the roll. Gavin Dowell, 52 this year, was convicted in June 2016 on indictment of wounding/inflicting grievous bodily harm following the incident. The Solicitors Disciplinary Tribunal heard Dowell, who received a suspended two-year sentence, did not report his conviction to the Solicitors Regulation Authority as he was required to do.