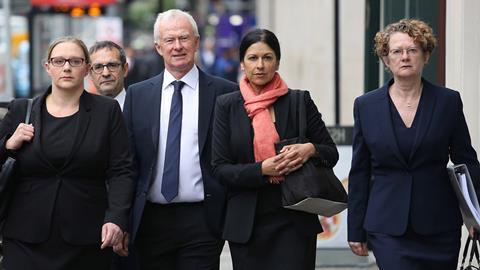 Human rights lawyer Martyn Day was convinced his Iraqi clients were telling the truth when he went public with allegations against British soldiers, the Solicitors Disciplinary Tribunal heard today.

Day, senior partner at London firm Leigh Day, returned from a ‘harrowing’ set of interviews with five apparent victims of brutal treatment at the hands of the army, and jointly led a press conference a month later.

Representing Day, Patricia Robertson QC of Fountain Court Chambers, said the Ministry of Defence had settled 300 claims related to misconduct by soldiers. The firm was being prosecuted on the basis of eight out of 950 claims it had brought overall.

Robertson, from Fountain Court Chambers, said the case had a wider significance for all solicitors and warned that a finding of misconduct might stop others from speaking up or acting in difficult cases.

Setting out the defence, Robertson said there was no ‘agenda’ on the part of accused solicitors Day, Sapna Malik or Anna Crowther to ‘do down the army’. She added that those involved in proceedings had in fact represented service men and women and their families and had taken a ‘great deal of satisfaction’ from that work.

On the subject of the 2008 press conference, Robertson cautioned the tribunal against applying hindsight to whether Day was acting improperly in believing his clients' accounts of mistreatment by soldiers following the Battle of Danny Boy in southern Iraq in May 2004.

She said Day had been ‘sucked in’ by a series of lies from Iraqi civilians but that he had made efforts to check their veracity with doctors and the British Army before the conference jointly held with Public Interest Lawyers’ director Phil Shiner.

‘What you are seeing is somebody responsibly addressing their mind to what judgments they are making and arriving at conclusions that are certainly within the bounds of what is reasonable,’ said Robertson. ‘You cannot [now] predict the outcome simply by picking out points seen as inconsistencies.’

Robertson said a successful prosecution would have a ‘chilling effect’ on lawyers and their willingness to act in difficult cases or speak out in matters of public importance.

‘This case does raise fundamental issues about the role of the solicitors as against the role of the court or tribunal and what lawyers can and cannot say about controversial cases they handling.’

She accused the Solicitors Regulation Authority, which is prosecuting, of ‘mission creep’ by widening its investigation and urged the tribunal not to ignore the ‘highly charged political context’ in which the claims were originally made.

On the issue of a document not disclosed for nine years that undermined the claimants' claim that they were innocent civilians, Robertson this was a ‘cock-up that was admitted and much regretted’. But she insisted this was not a ‘silver bullet’ to bring down the entire case and said the Al-Sweady Inquiry into the allegations had continued for a year after the document was disclosed.