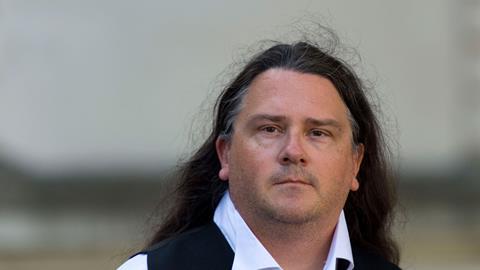 Controversial solicitor-advocate Alan Blacker was today struck off by the Solicitors Disciplinary Tribunal for a series of infringements including accounts failings and falsely claiming to have academic and other qualifications.

Blacker (pictured), who also goes by the name of Lord Harley, was not present for the tribunal's ruling following a two-day hearing.

The Solicitors Regulation Authority had brought a string of allegations against Blacker, including that he made false statements about his qualifications and accreditations and failed to keep accounts for the work his Rochdale firm was carrying out.

Blacker, who turns 44 tomorrow, has always maintained his innocence and submitted a three-page statement on Monday outlining his objection to the charges brought against him.

Ed Levey, for the SRA, said Blacker’s version of events was ‘make believe’ and ‘so far-fetched as to be discounted’.

Claims Blacker made on a LinkedIn profile, which he said was not a public document, included studies at Oxford, Cambridge and Dublin universities, as well as two honours degrees and accreditation in Ireland, Denmark and Canada. The tribunal heard none of these was true.

The tribunal also heard Blacker’s claim that he worked in banking in the late 1980s: Levey said that would have made him 16 or 17 at the time.

The SRA disputed a host of titles Blacker claimed to have, including a knighthood and a ranking position in St John Ambulance.

Blacker also said he worked in-house for his own charity, the Joint Armed Forces Legal Advocacy Service, but the SRA produced evidence that he had at least one private client.

Blacker was found guilty on all counts except a charge of recklessly misleading the court while appearing before His Honour Judge Wynn Morgan at Cardiff Crown Court on 28 August 2014.

Giving his ruling, tribunal chair Paul Housego congratulated the SRA on a good job following what was a 'plainly rather difficult case’.

The solicitor-advocate came to public attention in 2014 when he was criticised by a judge in court for looking like ‘something out of Harry Potter’ and for wearing medals and ceremonial ribbons on his gown.

Blacker has 21 days from the written judgment to appeal.