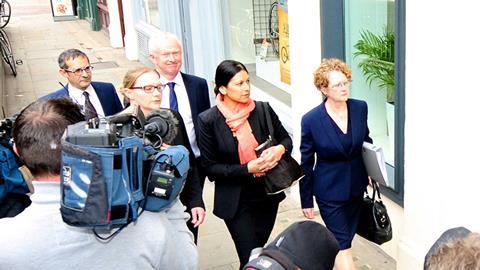 The firm, together with partners Martyn Day and Sapna Malik and solicitor Anna Crowther, deny charges of misconduct relating to the handling of claims against British troops following a 2004 battle in southern Iraq. Allegations that troops had tortured and murdered prisoners taken after the Battle of Danny Boy were dismissed as ’the product of deliberate and calculated lies’ by the Al-Sweady public inquiry in 2014.

Representing the firm, Patricia Robertson QC of Fountain Court Chambers said the case had a wider significance for all solicitors and warned that a finding of misconduct might stop others from speaking up or acting in difficult cases. Day had been convinced that his Iraqi clients were telling the truth when he went public with allegations at a press conference in 2008, she said.

While Day had been ‘sucked in’ by a series of lies, he had made efforts to check their veracity with doctors and the British Army before the conference, Robertson told the tribunal.

Earlier, the tribunal heard that the firm had pursued claims against troops while knowing its clients were members of an Iraqi insurgent militia rather than civilian bystanders.

For the prosecution, Fountain Court’s Timothy Dutton QC said emails in the build-up to the press conference showed Day was ‘alive’ to the possibility the clients were ‘concocting the story to embarrass the British Army’.

Malik was also accused of recklessness in not speaking up to question what was going to be said at the press conference, despite being party to discussions in the build-up. The tribunal heard she was a trusted colleague of Day and could have freely expressed any reservations she had.

Defending the decision to hold the press conference, Robertson said: ‘It is fair to say Martyn Day, in making use of the media, wanted that to be effective and powerful. He says in his experience use of the media to get the message out there does serve a legitimate purpose in flushing out evidence and bringing to bear pressure on the decision makers.’

Prosecution opening statements also referred to a key document held by Leigh Day which the SRA maintains could have undermined allegations of atrocities had it been disclosed ahead of the Al-Sweady inquiry.

Dutton said that any defence argument that it was overwhelmed by the volume of material would not hold water. ‘If you’re going to embark on international law claims where your documents are going to grow, all the more reason to have a system in place to identify all relevant documents,’ he said.

Robertson told the tribunal that withholding the document, known as the OMS list, was a ‘cock-up that was admitted and much regretted’. But she insisted this was not a ‘silver bullet’ to bring down the entire case and said the Al-Sweady Inquiry had continued for a year after the document was disclosed to it.

Dutton stressed that the SRA was not suggesting Day had been dishonest but that he was ‘pre-disposed’ towards wanting to accept his clients’ account and was not approaching the case with ‘openness and an inquisitive mind’.

In total Leigh Day received around £9.5m in fees from all the claims it brought, the tribunal heard.

The hearing, which is expected to last seven weeks, continues. This week the tribunal will hear evidence from witnesses including Colonel James Coote, who was at the time a major commanding British troops.