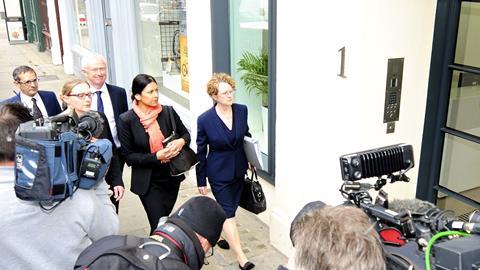 Human rights firm Leigh Day and its solicitors rushed into making unfounded allegations before breaching a series of solicitor rules over several years, the Solicitors Disciplinary Tribunal has heard.

The SRA closed its submission to a Solicitors Disciplinary Tribunal by saying the accused had fallen short of the standards required of practitioners and should not be afforded sympathy.

Timothy Dutton QC compared the testimonies of Martyn Day, Sapna Malik and Anna Crowther to Verdi’s Requiem as they came together in such harmony.

‘The orchestration of the evidence supplied by the respondents has been something to behold,’ said Dutton. ‘The three respondents have sought to harmonise with each other in much the same way as the trumpet section [in the Requiem]. The problem with the orchestration is that as this case has progressed it has become ever more readily apparent that is what has been occurring.

‘The tribunal has not been receiving their spontaneous recollections individually given. A witness must provide their honest recollection of matters which are not put forward to advance their case – what you have is more orchestrated.’

On the 19th day of the tribunal, Dutton recounted details of each allegation. The first charge related to a press conference held jointly in February 2008 by Day and Public Interest Lawyers director Phil Shiner, who has since been struck off.

The prosecution said there was no precedent for this type of press conference being held in British legal history. The lawyers took it in turns to make serious allegations against the British Army of torture and unlawful killing of Iraqi detainees, with the media shown graphic images of the alleged mistreatment.

The allegations were made despite Leigh Day holding a file which undermined the case – the file was disclosed only in 2013 – and without having consulted doctors or pathologists on the ground in Iraq. The allegations of torture and killing were later found to be false and based on lies told by witnesses.

Dutton stressed the SRA was not seeking to stop solicitors saying they were conducting claims or asking for a public inquiry, but instead the lawyers went further by endorsing the ‘sensationalised’ allegations and aligning themselves with their clients, in turn losing their independence.

‘They were throwing their professional expertise and referring to their lengths of service as solicitors – and the time reviewing the evidence – behind their opinion,’ said Dutton. ‘The risks were obvious… their approach to this was less responsible than that of journalists and yet they are members of the legal profession that aspires to high standards.

‘If a solicitor is going to state personal opinions in public he had better be right. The courts have stated since the 1970s that lawyers, and indeed journalists, must not conduct trial by press: the idea that a press conference is an adjunct to litigation [and] something that will put pressure on your opponent is frankly disturbing.’

Dutton went over allegations involving unlawful payments, failure to stop the case when it was clear it was based on falsehoods, failure to disclose the key document, and the destruction of that document by Crowther.

He said that the younger solicitor, who threw away a hand-written translation after typing a copy of the translation herself, had committed an error that was neither serious nor trivial.

But Dutton added: ‘Mr Day bears a very much greater responsibility for what has happened than Anna Crowther.’

Dutton concluded by focusing on the issue of the word ‘bribe’ being used in internal emails to describe payments to clients leaving Iraq to give evidence to the lawyers.

This word was used once by Shiner in an email to Martyn Day and once each by Malik and Crowther. On the final occasion of these, Malik’s response, as described by Dutton, was ‘we don’t want this to get to the MoD’.

The QC added: ‘It is very very unfortunate that solicitors hitherto of impeccable repute and very good reputation got themselves into this position. This is solicitors writing internal communication they may hope never sees the light of day – unfortunately they have.’

The firm and all three solicitors deny wrongdoing and all allegations against them. The defence closing submission is due to begin today.