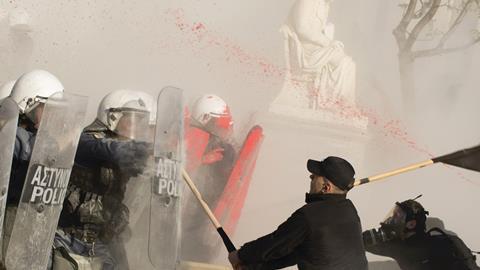 What are the implications of the Greek crisis for legal business and the rule of law? At a roundtable held under the Chatham House Rule, Jonathan Rayner heard City lawyers consider the potential fallout.

Mourning families too poor to bury their loved ones. And above it all, the spectre of a Grexit – a voluntary or forced Greek exit – from the eurozone and the EU, and all the uncertainty that potential exit entails.

That is the public face of the financial, political and social meltdown that is the Greek crisis. Newspapers and broadcasters have been tireless in their coverage of the ills besetting Greece – feckless government borrowing, uncollected taxes, populist politicians U-turning on policies. But what are the legal implications of the crisis? Are UK law firms able to help or should they be running for the hills? Would a Grexit spark an EU-wide constitutional crisis? Would it have a domino effect, with other member states also heading for the door?

Overriding all this, there is the complication that there is currently no treaty provision for either a voluntary, unilateral eurozone exit by a member state or for the expulsion of a non-compliant member state. If Greece were to leave the eurozone, it would need to pass legislation establishing not only the fact of its exit, but also a new currency and a fixed exchange rate for the automatic conversion of existing euro payment obligations into that new currency. This would take time and require the cooperation of other member states, piling yet more uncertainty upon the country.

Greece’s political turmoil, as if the country did not have problems enough, is also fuelling scepticism in other member states that the Greek government is able and willing to stick to its new commitment to unpopular reforms – to tax increases, pension and labour market reforms, and wholesale privatisation. More than 40 MPs in the ruling Syriza party are known to oppose prime minister Alexis Tsipras’ proposed reforms to secure a European bailout.

This opposition could not only prompt a snap general election, deepening the sense of insecurity that surrounds everything Greek. It could also stall the reforms themselves – reforms that must be put in place, say Greece’s creditors, before debt relief can be considered.

But wait – some positive news at last. On 22 July the Greek parliament voted through a package of reforms, including a new code of civil procedure to overhaul Greece’s notoriously sluggish justice system. The new code, which could help attract more foreign investors, was one of the conditions demanded by the EU and International Monetary Fund (IMF) in exchange for opening talks on a third rescue package.

These and other issues were the subject of a roundtable discussion, held under the Chatham House Rule, attended by City firm partners and senior representatives from a number of government departments.

The discussion was chaired by Stephen Denyer, the Law Society’s head of City and international, who went on the record to say: ‘English law and British legal services have a key role in the unfolding events relating to Greece. The UK may not be in the eurozone, but the vast bulk of eurozone financing is documented under English law and subject to dispute resolution in this country. The City of London has for decades been the home of a world-beating array of legal expertise and talent focusing on Greece, not only in relation to finance, but also shipping, insurance and wealth management.’

Denyer invites the government representatives to start the ball rolling. One says: ‘The government is naturally interested in a stable and economically growing eurozone because, unless the Greek crisis is resolved in a satisfactory way, there is likely to be a considerable impact on UK interests.’ Another explains that her department, since ‘before 2012’, has been supporting UK business in the face of eurozone instability.

‘We are researching the scale of British exposure in Greece, both for major UK corporations with significant interests and for smaller businesses with supplier and other contracts.’ She adds: ‘Our helpline for British businesses with Greek connections has received a mere eight calls in the last two weeks. It’s clear that British business saw the crisis coming and is keeping commercial relationships alive and well.’

A City law firm partner is next to comment. ‘We have been looking at constitutional aspects of the Greek crisis for the last three years and have come up with three disaster scenarios,’ he begins. ‘There is a unilateral exit from the eurozone, for which there is no treaty provision as the law stands. There is a negotiated exit from the eurozone, which would require the agreement of the other member states and takes time. And there is Greece’s expulsion from the eurozone following its defaulting on IMF loans; this is an as yet theoretical scenario, but one that would certainly make the country’s banks collapse.’

He adds that the very word ‘Grexit’ is a ‘misnomer’. The eurozone, he says, is ‘an amalgam of various provisions of a treaty; it is not an international organisation from which you can exit’. Nonetheless, he concludes, ‘under EU law, the European Commission could bring Greece to the Court of Justice of the European Union [the successor to the European Court of Justice]’ to answer for its failings.

Another City firm partner comments that the impact of Grexit on the UK economy ‘will be quite small because the Greek economy is quite small’. He observes that the primary law in a case of insolvency is that of the country where the insolvency takes place. ‘This could hit the bar hard,’ another remarks. ‘The bar traditionally deals with a lot of financial services work from overseas jurisdictions.’

A fourth City law firm partner adds another gloomy note. ‘A further emergency loan of €86bn is being talked about,’ he says. ‘But the privatisation of state assets [to raise funds] hasn’t really got going yet and the hedge funds are steering clear [of a risky investment in Greece’s future]. Sadly, the restructuring of Cyprus’s banks in 2013/14 holds few lessons for Greece. There was a big foreign depositor element in Cyprus, which is not the case in Greece.’

The discussion moves to private client issues. ‘After tourism,’ says a partner, ‘the shipping sector is the biggest element of the Greek economy. It would be a disaster if the ship owners upped and left. It’s quite feasible. After all, the ship owners believe that the communists are now in charge [of government] and fear the confiscation of their assets.’

Another partner is quick to agree. ‘Greece’s ship owners are contemplating moving their offices abroad,’ she says. ‘Two have recently gone to Cyprus and more are expected to follow. They might relocate to Cyprus, as well, or to Singapore or Hong Kong.’ She adds that shipping, which is primarily governed by English law, has been less affected by the economic squeeze than other sectors: ‘It is international in nature and so has avoided the worst of Greece’s internal problems.’

The discussion returns to more general issues. A partner says, ‘more in hope than expectation’, that if Greece is serious about making reforms, a priority should be to become friendlier to foreign investors. ‘The previous government made directors and even non-executive directors liable for the losses of their companies. The same applies to shareholders if they own more than 10% of the company. You could go to jail for three years if you fail to pay up.’ She pauses. ‘You would be out of your mind to invest in Greece. This is a problem that is going to linger even if Greece secures a bridging loan.’

‘At what stage,’ a partner asks, ‘would debt relief offered to Greece become too attractive for other troubled states to resist? Is there not a danger that, for example, Portugal would ask for a slice of the action? Maybe the EU should anticipate this by offering several countries the option of a bailout.’

Another partner reflects: ‘Our Greek clients have exposure to the Greek government, Greek banks and international banks. Business is stalled in Greece. There are no mergers and acquisitions. Investments aren’t flowing and the lack of investment is creating all the downsides that we are witnessing. The best advice for British law firms is to maintain a watching brief.’

A lone voice speaks up for altruism. ‘We should do everything we can to help Greece,’ it declares. ‘The crisis is not just Greece’s. It is the whole of Europe’s.’

That rarity at this roundtable, a non-lawyer, speaks next. ‘How can Greece salvage its national reputation in the eyes of investors?’ he wonders aloud. ‘As Angela Merkel said, the most important currency that Greece has lost is “trust” – investors, the European institutions and other sovereign states simply no longer trust it. What and how long is it going to take to attract companies to Greece to create jobs for the 25% of the population that is unemployed? Greece needs new ways to engage with the international community – it can’t survive without it.’

Stephen Denyer, on the record again, winds up the discussion: ‘We will look for opportunities to invite leading Greek lawyers to London to explore common approaches to Greek-related challenges.’

In the meantime, the Law Society is to maintain contact with all the participants at the roundtable and help circulate papers firms have written about the crisis. Denyer ends: ‘We will probably need to reconvene this group after the summer break. There’s much work to be done.’