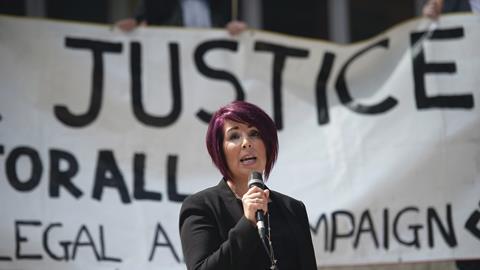 As direct action against the criminal legal aid reforms intensifies, Monidipa Fouzder went to Manchester to gauge the mood of solicitors and find out how much impact the boycott is having on courts.

Thousands of solicitors have been boycotting new legal aid work since 1 July – when a second fee cut of 8.75% was introduced. Their resolve appeared to grow stronger last week after members of the Criminal Bar Association (CBA) voted in favour of no new work and ‘no returns’.

The Ministry of Justice, meanwhile, was continuing to hold the party line by insisting it is ‘business as usual’.

As hundreds of solicitors gathered outside Manchester Crown Court (Crown Square) to protest against the cuts, the Gazette went to see if it was indeed ‘business as usual’ at nearby Manchester and Salford Magistrates’ Court.

The previous day was described as ‘horrendous’ by one member of court staff, with 34 people in custody and only two duty solicitors. Unrepresented defendants were being taken up, only to be sent back to the cells because their case was too serious. The Gazette was told delays and inadequate representation were causing frustration in the cells, leading to a ‘higher number of incidents’. Court business finished just before 7pm, two hours later than normal.

‘It’s not business as usual [as the MoJ claims],’ the staff member said.

A solicitor stands outside the magistrates’ court every day distributing leaflets to court users explaining why they are unable to represent them (they have been barred from distributing them inside the building.)

One unrepresented defendant told the Gazette his court experience left him feeling ‘dizzy’ and ‘disorientated’. He said: ‘It was hard being in the courtroom on my own. I didn’t have a clue what was going on.’

After the hearing, the defendant did not know how to get back to prison to collect his belongings. A nearby solicitor gave him £20 towards a taxi which he reluctantly but gratefully accepted.

Though the protest has attracted national attention, little coverage has been given to some of the mechanics involved.

One solicitor pointed out that there are currently two fixed fees for magistrates trials. The lower fixed fee for a trial (any class) is £312.23. To qualify for the higher standard fee of £653.99, solicitors must do a minimum of core costs of £422.98. These include preparation, advocacy, sending attendance letters and phone calls.

In metropolitan areas such as Manchester it does not include travel or waiting time at court (which could be hours). In January 2016 the government intends to replace the two fees with one fee of £449.45. With other costs such as overheads, office costs, IT, salaries, ongoing training, travel and indemnity insurance to consider, firms are operating under considerable pressure.

Criminal Law Solicitors’ Association chair Bill Waddington told a rally on the steps of Manchester Crown Court: ‘We’re not proud of causing chaos. What we’re demonstrating is that, without solicitors doing this kind of work – the glue that holds the criminal justice system together – the whole thing falls to bits.’

After the rally, solicitors met to discuss how long to continue the action. One attendee, from a small firm, said she could not be on board ‘for the long run’. She would ‘be gone before the action has finished. But we will go along with the mood here’.

And that mood was defiant. Though the results of the CBA ballot were not known, for solicitors in the north-west it made little difference. Most chambers, the Gazette was told, were already operating a de facto ‘no returns’ policy. Cheshire custody suites are reportedly in chaos and 200 calls were made by the Duty Solicitor Call Centre for one particular client, solicitors claimed. At Chester Crown Court, a judge demanded to know why a solicitor had not made a representation order and was not present.

‘We’re making an impact,’ one attendee told the meeting, imploring the crowd to ‘hold firm’. He said: ‘This is our last stand. We’re either in it together or we’re not.’

Zoe Gascoyne (pictured), partner at Liverpool firm Quinn Melville and chair of the criminal practice sub-committee at Liverpool Law Society, said the purpose of the action was to ‘get Mr Gove to engage with us. We want to engage with him. We don’t want this to have been in vain. It renders it pointless’.

Solicitors voted overwhelmingly to ‘up the ante’ on action. In practical terms, this means withdrawing completely from duty solicitor work.

Last week, minutes after the results of the CBA ballot were announced, the lord chancellor appeared before the Commons justice select committee. He told MPs he was ‘disappointed’ that members of the criminal bar had voted to take action, though it was ‘interesting’ that the vote was ‘closer than many might have anticipated’, and that turnout was low.

Gove said he hoped to continue working with the CBA leadership and the Bar Council to address a number of ‘perfectly legitimate’ concerns.

As the Gazette went to press, the CBA executive committee announced it had put in place a protocol for firms wishing to take action and recommended that this action begin on 27 July. On Wednesday solicitors are planning to rally outside Westminster Magistrates’ Court in London.

A solicitor who attended the Manchester post-rally meeting said: ‘I’ve been surprised that we have managed to keep [the action] going for this long. But this solidarity has never been seen in the profession.’