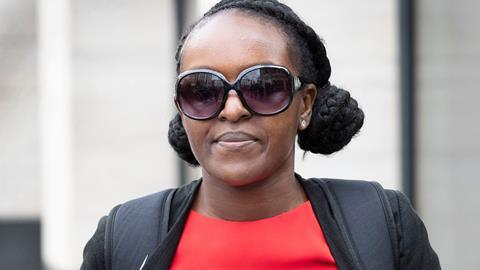 Onasanya struck off after 'disastrous' perverting course of justice conviction

Disgraced former MP Fiona Onasanya has been struck off the roll of solicitors over her conviction for perverting the course of justice.

The 35-year-old, who was a commercial property lawyer before entering politics, had remained on the roll until today’s decision by the Solicitors Disciplinary Tribunal.

She was found to have failed to act with integrity and failed to behave in a way that maintains the trust the public places in her and the provision of legal services. She was also found to have acted dishonestly.

Onasanya was struck off following a half-day hearing, but the SDT also opted to cut the £22,762 costs claimed by the Solicitors Regulation Authority. Tribunal chair Edward Nally expressed 'anxiety' about the figure, which was based on 40 hours' preparation, and reduced it to £6,562.

Giving sanction, Nally said: 'A solicitor owes a duty to the court and, whilst a parliamentarian makes the law as an officer of the court, a solicitor must uphold the rule of law and administration of justice. Sadly in this case Miss Onasanya has failed in those duties.'

He added that the matter has had 'disastrous consequences both personally and professionally' and that the tribunal had taken full account of this.

Onasanya was elected to represent Peterborough as a Labour MP in 2017 but in January this year she was jailed for three months for perverting the course of justice in connection with a speeding offence. She continued as an MP during her time in prison. Her application for permission to appeal against the conviction was refused by the Court of Appeal in March.

Representing herself at the tribunal today, Onasanya maintained her innocence and said she had applied to challenge her conviction with the Criminal Cases Review Commission. She had applied, unsuccessfully, to have the SDT hearing adjourned while the outcome of that challenge was resolved.

She told the tribunal: 'I did not do an act intending to pervert the course of justice. I maintain that stance, it was the same at trials where I pled not guilty.'

She challenged the SRA's submission that she had assisted in 'dishonest support for her own benefit', asserting that her driving licence remained clean and there was no benefit to her from lying about the identity of the driver.

Nimi Bruce, representing the SRA, said the judge in her case said she had 'let down those who look to you for inspiration, your party, your profession and parliament'.