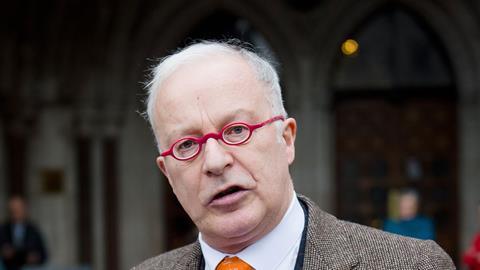 Disgraced former solicitor Phil Shiner tried to offload assets worth nearly half a million pounds to family members before declaring himself bankrupt, it emerged today.

The Insolvency Service said in a notice that Shiner, the former director of human rights firm Public Interest Lawyers, gifted away his assets before asserting he would be unable to pay creditors.

Birmingham-based Shiner, 61, has now had his bankruptcy extended following what was described as ‘unacceptable’ behaviour when he tried to deny ability to settle liabilities.

The Insolvency Service said Shiner petitioned for his own bankruptcy in March 2017, a month after he was struck off for dishonesty, declaring he had no money to pay his creditors following the closure of the firm.

But in the six months leading up to his petition, Shiner made a series of transactions to rid himself of his assets by gifting them to family members and to Public Interest Lawyers Limited.

The notice stated that Shiner sold a commercial property for £245,000, which he paid to the limited company, then transferred ownership of his £300,000 house with no mortgage, along with two guitars he valued at £3,500 and other artwork, to a family trust in December 2016. The terms of the trust allowed Shiner to remain living in the property, despite not owning it.

In January 2017, he sold a second commercial property for £305,000, and again paid the proceeds into PIL’s funds, then transferred from the firm’s accounts £94,908 into a personal pension fund and a further £74,485 into a trust account for his family. The remainder allegedly went to pay creditors owed money by the firm.

Justin Dionne, official receiver from the Insolvency Service, said: ’Mr Shiner thought he could be clever by giving away his assets to his family members so that when he declared himself bankrupt there wasn’t anything to pay his creditors with. Sadly he was mistaken as all his activities were easily spotted and we have since been able to recover a substantial amount of money, even if it was in his family’s name. Mr Shiner’s activities should serve as a lesson and act as a deterrent to him and others from acting in the same way.’

Shiner has now given an undertaking be bound for six years by restrictions affecting bankrupt people that are set out in insolvency law.

The solicitor was a prominent campaigner in human rights law and became a divisive figure for his running of claims against the British government on behalf of Iraqi civilians.

The Solicitors Disciplinary Tribunal found that Shiner authorised and procured his firm to enter an agreement in June 2015 providing financial benefits to a third party in order for that person to change his evidence to the Al-Sweady inquiry into allegations of atrocities in Iraq.

Shiner’s firm had a funding agreement which saw it receive more than £1.6m in relation to the Iraqi claims, with £500 a claim paid to a ‘fixer’ who helped to find clients.