A solicitor who stole more than £600,000 from elderly clients to fund a secret spending binge on prostitutes and adult chatlines has been jailed for four years.

Andrew Taylor, 57, used the services of up to 90 escorts, claiming medication he was taking for Parkinson’s disease left him with ‘increased hyper-sexuality’.

The village solicitor had been a respected figure in the suburb of Cheadle, Greater Manchester, as treasurer of the local cricket club, chairman of the civic society judo club and a committee member for the village hall and traders’ association.

But unbeknown to locals Taylor raided the accounts of 13 clients aged between 67 and 100 for whom he held power of attorney.

Manchester Crown Court (pictured) heard that as part of his ‘compulsive, addictive and obsessive shopping’ habits, he gave one call girl £30,000 then made 808 payments over two years totalling over £100,000 on sex chat and sex webcam services.

He kept the names of all the escorts he used on his mobile phone and paid them a total of almost £80,000 over a three-month period. Another £85,000 was spent on eBay, through which Taylor bought pens, pottery and cricket memorabilia.

Taylor, who specialised in probate, wills, trusts and powers of attorney at his firm Andrew J Taylor Solicitors in Cheadle, is likely to be struck off after he admitted fraud charges.

Seven of his victims died before they could see him sent to prison.

Andrew MacIntosh, prosecuting, said: ‘He said in 2010 he was diagnosed with Parkinson’s and that at around the same time his son had had a breakdown and had to be taken out of university. He said that this and the pressure he was under at work and his medication caused him to behave in the way that he did.'

MacIntosh said one of the women Taylor had met on the chatlines had asked him to lend her some money and that he had taken some money from a client account to give to her. The court heard that in the end Taylor gave her £30,000. He said that having done it once he got carried away, began spending his own clients' money and got sucked into a ‘self-destructive mode’.

The court heard Taylor’s victims had dementia or lived in care homes and were robbed of sums between £1,200 and £400,000.

One woman of 87 who lived in a care home died after her account was plundered for £3,000 and at the time of her death her estate had insufficient funds to pay for her funeral.

Another client of 87, who suffered from dementia, lost £107,500 from her accounts while a woman aged 86 lost £399,000 after Taylor was able to get access to their bank accounts. 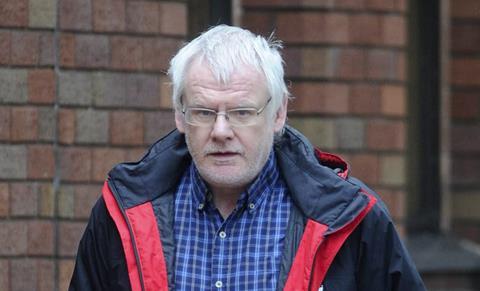 Taylor (pictured left) was arrested when police raided his offices in July 2013 after concerns about his activities. When police asked one of his victims why she thought Taylor had taken her money and she replied, ‘perhaps he thought I was an old woman not here for long and had no use for it’.

Taylor initially claimed he had taken some of the money to pay a tax bill claiming he had been ‘daft’. He claimed his practice, which had been running since 1990, had been ‘reasonably successful’ and accounts showed the firm had made a profit of £164,000 the previous year.

But he then admitted using the accounts of his clients for his own secret ‘play account’ which he used to ‘muck around’.

Police contacted the chatline Adult Works and obtained details of payments which showed he had two accounts with the company, the first registered in 2007 and the second registered in 2011.

A purchase history revealed that in 2007 the defendant made 16 payments to the company using that first account and during the following three years made around 50 payments each year.

‘The defendant’s accounts also recorded a payment in 2013 of £80,000 to HM Revenue & Customs in settlement of his latest tax demand. He said he was surprised at the amount which he had taken. He said that he believed that the drugs which he had been taking for his Parkinson’s had affected his behaviour and that he had instructed solicitors to bring an action against his doctors.’

In all Taylor stole £623,920. In mitigation, Kate Blackwell QC said her client’s son, who had suffered with schizophrenia, took his own life a few months ago.

She said: ‘Mr Taylor feels a painful sense of responsibility for this and also for his behaviour and actions. He has stolen a great deal of money from a group of people who trusted him.

‘It was a frenetic episode in his life and unfortunately, a healthy man both physically and mentally throughout his life, in 2010 he began to be debilitated by Parkinson’s disease.

‘I do not intend to paint him as a victim but looking at his life today you might be forgiven to think what more can be done to punish him than has already affected his life. His life came to disarray from the time of his diagnosis with Parkinson’s disease and his access to adult sites and obsessions came to grow out of control.'

But passing sentence, Mr Justice Peter Openshaw said: ‘Some of the victims were understandably outraged at the deceit practised against them. Others may not be aware of what he was up to but their families have been left with the stress and anxiety.

‘The money has now been squandered on various sexual excesses and the court is aware of various absurd extravagances. I accept he had many problems and I do not doubt they have preyed on his mind. It does seem to me that the compulsive behaviour and extravagance was due to the drugs he was receiving.

‘However he was still a practising solicitor and he was competently conducting is business. He had family and friends and advisers he could and should have sought help from and identified the affect the medication was having on him.’