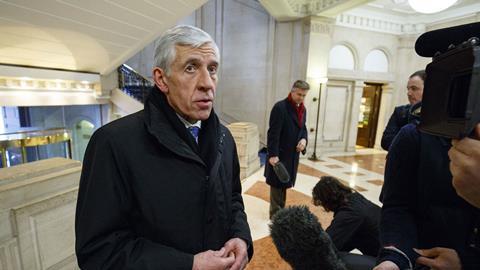 Speaking at the Modern Claims Conference in Manchester, Straw (pictured) said lawyers had missed their chance to clean up the system themselves and should face tough restrictions from Whitehall.

The retired MP and barrister said whiplash claim figures continued to be ‘off the scale’ despite attempts - including a referral fee ban prompted by his own private members’ bill - to bring them down.

Straw said the legal system around personal injury remains ‘dysfunctional’, with a ‘cosy and almost corrupt’ link between lawyers and medical reporting organisations, and ‘eccentric’ decisions from the court.

He fully backed the Treasury’s proposed ban on general damages for soft-tissue injuries and plan to increase the small claims limit to £5,000.

‘There is no question of a compensation culture. This is an industry which has ballooned out of nowhere, fuelled partly by too many lawyers chasing too little business,’ said Straw.

‘Whiplash is an innovation of fertile legal minds which has no real foundation in medical knowledge. Everybody knows the vast majority of whiplash claims are completely unjustified. I support any measures to eliminate soft-tissue injuries.

‘[I would] ban whiplash as a basis of claims unless the claimant was able positively to prove they had sustained serious injuries.’

Straw faced a largely hostile response when taking questions from audience members, who said existing measures such as the MedCo scheme of whiplash diagnosis had yet to be given time to bed in.

Another conference delegate asked what message Straw had for lawyers who face losing their job if government measures are introduced.

‘This is a market and there are, all the time, industries which rise and fall,’ he said. ‘The legal system faces very severe challenges. I am very angry on their behalf. [As lord chancellor] I started discussions with the law schools about the fact they were recruiting too many students on the promise of jobs that were not going to be there.’

Straw added: ‘There are too many lawyers chasing too little business and you can end up with the abuses and manufacturing of claims which has taken place.’