Solicitor fined £7.5k - with four times that in costs

A solicitor has received a £7,500 fine, but four times that amount in costs, for his 'sloppy' conduct in a property transaction.

The Solicitors Disciplinary Tribunal said Daniel Mun Kin Tang's work on the transaction in 2012 'was more than sloppy', in a judgment published on its website.

Tang, a partner at north London firm Christopher Mathew Solicitors and admitted to the roll in 2006, acted for TP Ltd in relation to the purchase of three flats. He was instructed to prepare and execute an investment agreement to part-fund the £252,000 purchase. 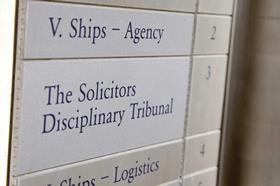 Tang denied the Solicitors Regulation Authority's allegation that the transaction had 'a number of dubious features'. The judgment states that he 'accepted that he was "sloppy" in the way that he handled the transaction and ought to have satisfied himself that certain features of the transaction were not dubious, but that did not mean that the features were dubious'.

Tang, who had acted for the parties previously, said he had 'not been on such guard as he would have been if this was the first time he acted for them'.

However, the tribunal identified 'red flags' that 'merited further investigation and enquiry'.

The tribunal said it was not within Tang's remit to advise Ms FA, a third party part-funding the transaction, to seek independent financial advice - 'but, as he accepted, he should have advised her to [seek] independent legal advice'. He did not take unfair advantage of her, the tribunal said.

Tang admitted he lodged an application to register a charge on the property without Ms FA's written consent when he 'ought to have known' this was required.

The tribunal said Tang 'appeared to have fallen into a trap where he failed to distinguish between the personal and professional when he was doing business with a family with whom he was acquainted'.

The tribunal found that Tang made an error in the way he completed a MGO1-particulars of a mortgage charge form. 'The tribunal accepted that this was a genuine mistake but having made the mistake and knowing that he had made the mistake the respondent did not rectify it or advise TP Ltd of the error and what could be done to rectify it,' the judgment states.

In mitigation, Tang 'acknowledged that this was not a shining example of his work' and that he had been far too "sloppy" in his approach'. The 'minimal' harm caused was 'due to luck and not the respondent's judgement', the tribunal said, assessing the conduct to be 'at the higher end of moderately serious'.

Counsel for Tang argued that the SRA's claim for £34,760 costs was 'manifestly excessive for a one transaction case', reminding the tribunal 'that costs should not be a penalty and if they were disproportionately larger than the sanction they could be seen as a penalty'.

However, the tribunal concluded the allegations were properly brought. Tang was ordered to pay a £7,500 fine and £32,469 costs.