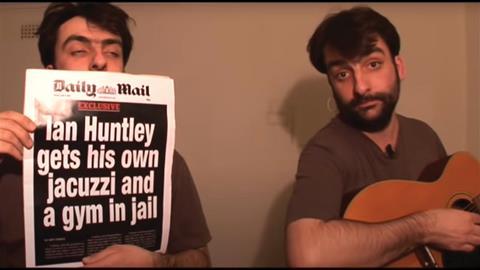 Fake Law: The Truth About Justice in an Age of Lies

Our anonymous learned friend is back. Hold on to your wigs.

There is a video on YouTube called The Daily Mail Song. It has been viewed 2.4 million times. It has a jolly melody and the comedy duo Dan and Dan (both played by Dan Haythorn, pictured above) sing spoof headlines that could have been from the tabloid: ‘Royals on the first page, swine flu and road rage, find Maddie, foreign baddie, put him in a big cage… Ian Huntley gets his own jacuzzi and a gym in jail. It’s absolutely true because I read it in the Daily Mail.’

I like to imagine the Secret Barrister listening to this song on loop, whistling along and churning out chapters for Fake Law: The Truth About Justice in an Age of Lies. As our secretive author slurps coffee – and occasionally tweets truth to power – I like to think there is a heated rendition of the chorus: ‘Criminals get Marks and Spencer vouchers when released on bail… It’s absolutely true because I read it in the Daily Mail.’

This book is a no-holds-barred tour of misleading headlines, political spin and monsters-under-the-bed. It is a reverse storybook of how manufactured outrage, synthetic anger and perceived enemies found fertile ground in the most emotive legal stories of our time. In each chapter, the true narrative is exposed. When children write stories they tend to focus on the goodies, the baddies and two optional endings: either everyone lives happily ever after, or the author suddenly wakes up.

This book is a wake-up call, a siren, the whistle calling foul.

The exhaustive task of dissecting emotive, difficult legal issues and explaining them accurately, factually and from scratch is dealt with as one would expect from a trained lawyer. Facts and evidence are the building blocks of this book and they are meticulously footnoted throughout. That task, at times, could have been laborious for author and reader alike – but is saved by beautiful writing, clever crafting and a characteristic lightness of touch.

The book guides us through myths and realities of laws spanning topics such as Brexit, personal injury, employment and terminally unwell children. But the author – a criminal practitioner – is strongest on home soil. The chapter on self-defence (‘Yourself and Your Home’) stands out. Our bewigged guide takes us through the actual law on self-defence if someone invades your home – rather than flashy ‘bash-a-burglar’ headlines. The reader learns of notions such as reasonable force, necessity, not waiting until one is struck before responding and what you may do to protect your family in times of urgency.

As the book proceeds, the reader gets the impression that the author has some defending of their own to do. The law is their home. Hardworking lawyers are family. And, boy, will they be defended from sustained attack. Armed with facts, bolstered by examples and delivered with the precision of an exceptional advocate – this is an author no longer waiting to be struck before striking. This is a triumph of a book that will satisfy any lawyerly definition of reasonableness, urgency and necessity.

Joanna Hardy is a criminal barrister. She tweets as @joanna__hardy