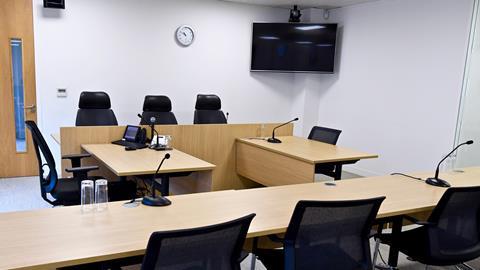 The SDT ordered that the respondent should be struck off the roll. While in practice as a partner at Wilson & Berry Solicitors, in interviews with an SRA forensic investigation officer, the respondent had stated that: (i) she had submitted a proposal form seeking professional indemnity insurance cover for the firm to the firm’s previous insurers, company 1; (ii) the firm had merged with firm 2; (iii) the firm’s PII cover was provided under the firm 2 group of companies; (iv) she had informed company 1 of that merger; (v) she had submitted notification of that merger, together with evidence of the same, to the SRA; and/or (vi) she was not linked with any other businesses and was not a director of firm 2, in circumstances where one or more of those statements was not correct. She had thereby breached principles 2, 4 and 5 of the SRA Principles 2019 and paragraph 7.4(a) of the SRA Code of Conduct for Solicitors 2019, and principles 2, 6 and 7 of the SRA Principles 2011. She had acted dishonestly.

In a ‘New Partner/Fee Earner Questionnaire’ form submitted to company 1, she had confirmed that she had not ever been subject to investigation by the Law Society in circumstances where that was not correct, thereby breaching principles 2, 4 and 5 of the 2019 Principles.

She had failed to provide information and documents sought by the SRA in notices issued pursuant to section 44B of the Solicitors Act 1974, to respond to a mandatory questionnaire sent to the firm by the SRA, or to cooperate in one or more investigations carried out by the Legal Ombudsman, thereby breaching principles 2 and 5 of the 2019 Principles and paragraph 7.4(a) of the 2019 code, and principles 2, 6 and 7 of the 2011 Principles.

The respondent had been motivated by personal gain. She had sought to keep the firm trading in circumstances where she knew that it was not entitled to trade, for her own personal benefit.

She had caused harm to her clients and to the reputation of the profession. Her conduct was aggravated by her proven dishonesty. However, she had no previous disciplinary findings by the SDT.

The seriousness of the respondent’s misconduct was at the highest level such that the protection of the public and the reputation of the profession required her to be removed from the roll. There were no sufficient circumstances to bring the respondent in line with the residual exceptional circumstances category referred to in Sharma.

The applicant had been the fourth respondent in proceedings before the SDT. The other respondents were all solicitors. The applicant was an unadmitted person and a qualified accountant. He was the accounts clerk at their firm.

The SDT had found that the applicant had occasioned or been a party to, with or without the connivance of a solicitor, an act or default in relation to a legal practice which involved conduct on his part of such a nature that it would be undesirable for him to be involved in a legal practice, in that he, while remunerated by and under the direction of solicitors in the firm, had allowed debit balances to occur in client account and had back-dated bills.

The applicant submitted that the section 43 order was ‘affecting [his] long-term professional career as an accountant’ and further restricting him from acquiring his ‘practice licence from [his] professional body to setup [his] own business and work as a sole trader’.

The SDT noted that the applicant was unable to show that he had worked within a legal practice since the imposition of the section 43 order without incident or concern. While that was a decision made by the applicant as he wished to work for an accounting firm rather than for solicitors, it hindered his ability to persuade the SDT that the section 43 order was no longer required to protect the public from harm if he were to work for a solicitor.

Similarly, there were no character references attesting to the applicant’s abilities and/or certification as to any courses undertaken by him to demonstrate a current knowledge of what was needed to ensure compliance with the SRA’s rules and regulations.

While the SDT appreciated the rationale underpinning the applicant’s offer to provide an undertaking to the respondent and the SDT, that was an inadequate safeguard in respect of the ongoing risk that he presented to the public. In particular, a solicitor wishing to employ the applicant would not be able independently to discover the undertaking he had given, unlike the section 43 order, which they would. The applicant had not demonstrated that he could safely work within a legal environment without restriction.

The SRA intervened on 26 August into the above-named remnants of the recognised sole practice of Jeremy Richard Ffolliott Sorrell. The firm closed on 30 June 2020, having formerly practised at 23 Turnpike Lane, London N8 0EP.

The grounds of intervention were: it was necessary to intervene to protect the interests of former clients of Sorrell (paragraph 1(1)(m), Part I, Schedule 1, Solicitors Act 1974).

Sorrell does not hold a current practising certificate.

No intervention agent has been appointed. The SRA will be making arrangements to collect the practice papers as soon as possible.