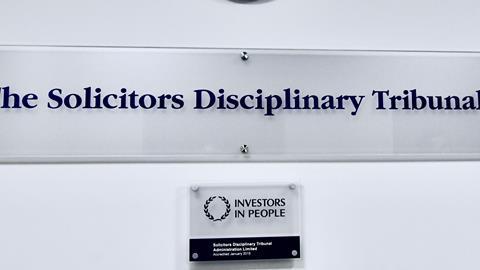 The Solicitors Disciplinary Tribunal ordered that the respondent should be struck off the roll.

While in practice as a trainee solicitor at Stachiw Bashir Green Solicitors, the respondent had, in a conveyancing transaction regarding property 1, inappropriately signed replies to requisitions on title in the name of Janet Butterfield; and inappropriately signed a TR1 form in the name of Janet Butterfield; thereby breaching principles 2 and 6 of the SRA Principles 2011.

In a conveyancing transaction regarding property 2, she had inappropriately signed a certificate of title in the name of Janet Butterfield, thereby breaching principles 2 and 6.

In a conveyancing transaction regarding property 3, she had inappropriately signed a certificate of title in the name of Janet Butterfield, thereby breaching principles 2 and 6.

In each case she had acted dishonestly.

The respondent’s motivation was unclear, but she had appeared to want to take a shortcut and had possibly wanted to prove herself, having completed her training contract.

Her misconduct had been deliberate, calculated and repeated. It had continued over a period of weeks and involved a number of documents. There was an element of concealment in that the forged signatures concealed the fact that Ms Butterfield had not signed the documents herself. The respondent had sought to blame her employers for her misconduct by asserting that they had given permission to her to do so.

There were no mitigating features. Although the respondent had admitted that what she had done was wrong, her explanation of the circumstances in which she had acted had not demonstrated genuine insight.

The SDT ordered that the appellant’s appeal under section 44E of the Solicitors Act 1974 (as amended), dated 19 October 2020, should be dismissed.

The appellant’s appeal was against a decision of an adjudication panel of the SRA dated 23 September 2020. The adjudication panel (AP) had determined that, in relation to a complaint by a Mrs U about the appellant’s conduct on a probate matter relating to the estate of her husband who had died intestate, the appellant having been appointed in his professional capacity as the personal representative of the deceased’s estate, the appellant had breached principles 2 and 6 of the SRA Principles 2011 and had failed to achieve outcomes 5.3, 11.1 and 11.2 of the SRA Code of Conduct 2011.

The parties had agreed that the role of the SDT was to review the AP’s decision and not to rehear the case. It was also accepted by the parties that the SDT should only interfere with the decision where it was wrong or unjust due to a serious procedural error or other irregularity. When assessing the AP’s decision, the SDT was required to consider whether the decision was outside the bounds within which reasonable disagreement was possible.

The SDT, having dismissed all the grounds of appeal, had determined to affirm the decision of the AP.