In search of the Inns of Court trenches 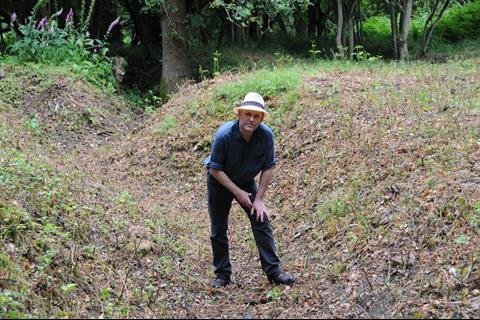 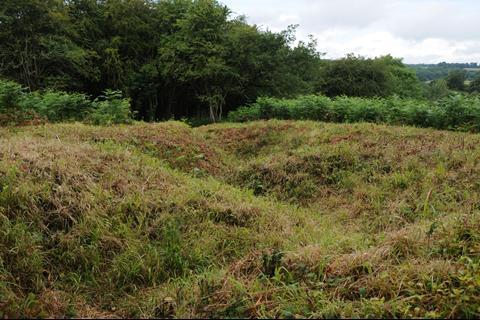 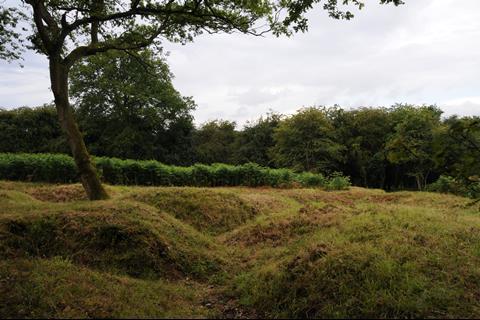 A Chilterns common still bears scars of what lawyers did in the Great War.

I half expected a man in a fake tin hat to be selling tickets to the ‘Berkhamsted World War 1 Experience’ in the High Street. But the trenches dug by lawyers turned soldiers between 1914 and 1918 are anything but a tacky tourist attraction.

First, they are quite tricky to find – it took two false starts and a good soaking from the rain before, with the help of a leaflet from the local library, I found the public footpath sign pointing to ‘WW1 trenches’ on Berkhamsted Common. Second, there’s nothing tacky about them: just the faint but unmistakeable zig-zag of a military earthwork by an overgrown bridleway.

A little bit further along the bracken has been cleared around the remains of a jumble of collapsed trenches, perhaps three feet deep. A signpost informs visitors that these were dug by the Inns of Court Officers Training Corps (OTC), which trained here throughout the Great War.

The Inns of Court OTC features on almost every page of the Law Society's record of service of the first world war. The corps, nicknamed The Devil’s Own, was a long-established territorial unit based in Chancery Lane, with a long connection to the legal profession. (It exists today as the Inns of Court & City and Essex Yeomanry.) On Sunday 2 August 1914 it had a complement of 230 men, who were recalled in a hurry from Salisbury Plain where they had just arrived for their annual training camp.

A history by its commanding officer Lieutenant-Colonel Francis Errington gives an evocative account of arriving in London at 5.30 am on 3 August, a bank holiday. ‘We marched to our headquarters at Lincoln’s Inn, along deserted streets in the beautiful summer morning, and dispersed in search for breakfast.’ The favoured venue was the deluxe First Avenue Hotel, just round the corner in High Holborn. Alas the hotel was destroyed in the Blitz: a less welcoming institution, the Principal Registry of the Family Division, now occupies its site.

The order to embody the corps came on Tuesday 4 August, the date war was declared. On 10 August the OTC advertised in The Times for 2,000 volunteers. It was inundated. Over the next four years thousands of solicitors and articled clerks, one in 10 of those who applied, passed through its ranks on their way to becoming junior officers.

Among the first week's recruits was 28-year-old Oxford graduate Robert Jesson, managing clerk with Southampton firm Hepherd Winstanley (now part of national firm Bond Dickinson). Jesson, admitted in 1913, had been a first class cricketer, taking five wickets in his debut for Hampshire in 1907.

By late September, the corps was eight companies strong, putting pressure on its HQ premises despite being granted the use of Regent's Park for night exercises. After a brief search for sites it set up camp in Berkhamsted, where the common land was within easy walk to the main railway line.

At first, it was a makeshift operation, Errington recalled. ‘From the point of view of material resources, we had many deficiencies.' Equipment was obsolete and ’so old that, in many cases, it had to be held together by string.’ A stroke of luck was the arrival of 800 new rifles – ‘probably by mistake as their delivery was almost immediately followed by an order to return them’. (The colonel managed to hang on to 400.)

‘From the moral point of view, however, we were more fortunate,’ Errington wrote. ‘The Corps had in its ranks an inexhaustible supply of men admirably qualified by character, brains and physical fitness, to instruct or train.’

With only three to four months before the trainees were expected to be needed at the front, Sandhurst square-bashing methods were abandoned. There was only the ‘minimum amount of close order drill’. Instead, the officers to be learned practical skills: how to navigate at night by prismatic compass, how to uncock a Lee Enfield rifle without blowing someone’s foot off.

And how to dig. By the end of the war the officers-to-be had dug 13,000 yards of trenches. The history records that 'conditions... fell short of the ideal. The soil consisted of clay, plentifully besprinkled with flints. Digging was in consequence very strenuous work, and if trenches were left uncared for any length of time in the winter, they rapidly deteriorated'. But it was considered essential training for officers and gentlemen. ‘It is good for every man to have some experience of what a heavy job of digging feels like, and the carrying of tools on the march.'

By the end of the war, 13,800 men had trained in the Berkhamsted trenches. About 12,000 were commissioned in to regiments; of those 5,000 were wounded and 2,100 were killed, a casualty rate far higher than for the army as a whole. One casualty was Robert Jesson. The cricketer and managing clerk was swiftly gazetted in to the Wiltshire Regiment, was wounded at Gallipoli and killed at the second battle of Kut, in modern day Iraq, in February 1917. His name is recorded on the walls of the Law Society’s reading room.

Just outside the Berkhamsted camp, a neat pillar commemorates the corps, with its motto salus populi suprema lex – the safety of the people is the supreme law. An inscription notes that the ashes of Colonel Errington, ‘loved and honoured commander’ are buried nearby. If you’re visiting the Inns of Court trenches by car, this is a possible place to park. Otherwise, it's a pleasant walk up the hill from Berkhamsted Station, once you know the way. If any readers are interested, I'd be delighted to give directions.

On my walk back down, something red caught my eye at the roadside: a lone, wild, poppy.

A parade by the Inns of Court regiment is among events organised by Berkhamsted Town Council to commemorate the start of the First World War. More information about the Berkhamsted trenches can be seen here.