Unfortunately there is little by way of legal protection for cohabiting couples, leaving increasing numbers of clients facing potentially significant difficulties and hardships. Recent statistics produced by Resolution reported that nearly 98% of professionals surveyed in a 2017 ComRes survey have worked with a cohabiting couple who they were unable to help. Another 90% reported that couples were often surprised at their lack of rights. The report went further still, showing that only one couple in three knew that there was no such thing as common law marriage.

A 2007 Law Commission report on cohabitation made various recommendations, noting that the legal rules that currently apply are complex, expensive and uncertain. 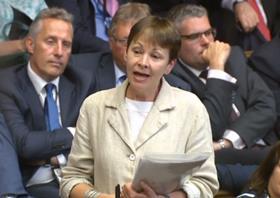 Many clients still believe that if a couple live together for long enough, or if they have children together, they become ‘common law spouses’. There is also an assumption that in the event of a breakdown of that relationship, the law is there to step in and provide clarity and certainty, making financial provision available similar to that which is available in the event of a divorce of a married couple. In fact, often the only legal recourse available to cohabitees, particularly when dealing with property issues, is a reliance on outdated and antiquated land law principles. This does not reflect the changing needs of increasing numbers of families.

Caroline Lucas MP (pictured) raised an early-day motion last November, which has already been supported by 23 cross-party MPs, to bring this issue to the government’s attention again and press for change. Resolution members across the country are lobbying their MPs, campaigning for better legal provision for cohabiting couples, and trying to raise awareness through social media and the press to ensure that there is a better understanding of the options available to cohabiting families at this time. For more information, or to join the campaign, go to www.resolution.org.uk/Cohabitation.