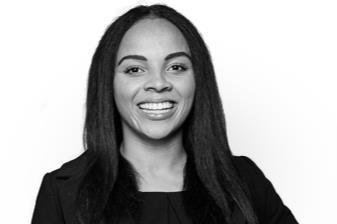 Why is she in the news? Wilson was repeatedly mistaken for a defendant in court last month and explained what happened on Twitter. HM Courts & Tribunals Service chief executive Kevin Sadler apologised and said he was investigating the role of his staff and contractors as a matter of urgency.

Thoughts on what happened: ‘Being assumed to be a defendant three times in one day because of the colour of my skin is a symptom of a much bigger issue surrounding race in the UK. These assumptions are rooted in the overcriminalisation of black people, who are overrepresented at every stage in the criminal justice system. Black people are over-policed, with stop and search rates showing that black people are stopped and searched almost 10 times as often as their white counterparts. Black people then appear in court at a higher rate, and black men are 26% more likely than white men to be remanded in custody. Anti-racist training is needed. Those working in the criminal justice system should be alive to systemic racism and need to know how to actively challenge that, not reinforce it.’

Dealing with the media: ‘The support from the profession was overwhelming and a number of senior barristers and solicitors reached out to offer support. It became apparent how many black barristers had similar experiences and many white barristers recognised how white privilege had meant that they had never had to justify their presence in court. I was trolled by people who told me that it had nothing to do with race. Having seen numerous white barristers and solicitors (of both genders and of a range of ages) freely enter and leave the courtroom without challenge, this simply does not ring true.’

Why become a lawyer? ‘I became a lawyer to effect real change, particularly in relation to the criminalisation of black people that I saw from a young age. My close family friend was killed when I was 17; he was assumed to be part of a rival gang because of the colour of his skin. I saw then how dangerous assumptions could be.’

Career high: ‘I argued down the benefit figure in a confiscation case where my client (a young black boy) faced losing his entire inheritance from his elderly relative. He was living in poverty and if all of that money had been taken, the cycle of offending may have continued.’

Career low: ‘Being told by a senior barrister that the black community “help business” because they are “always killing each other” forced me to acknowledge the disconnect between some lawyers and clients. It reminded me that racism is still a huge issue in our profession.’