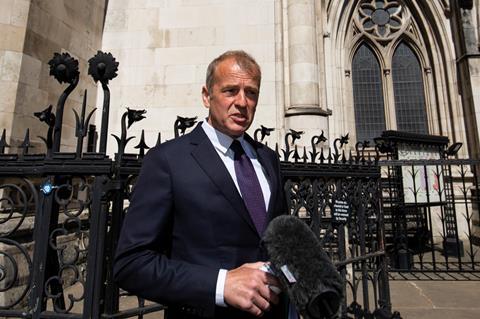 Why is he in the news? The firm represented 32 former postmasters who had longstanding convictions quashed after they were wrongly found to have stolen money from the Post Office. The convictions were based on the faulty Horizon computer system installed in Post Office branches.

Thoughts on the case: ‘This is a unique case for all the wrong reasons. It is the biggest miscarriage of justice in UK legal history. Not only the most appellants in one case, but the conduct complained of took place over a period of almost two decades. These are decent, ordinary people who went to work to earn a very basic living and serve their communities. They were considered to be collateral damage and a price worth paying for an organisation hierarchy whose vanity, ego and own reputations precluded them from admitting that an IT system costing tens of millions of pounds was not fit for purpose and should have been scrapped prior to implementation. As I heard the names of the 39 people being exonerated read out in the Court of Appeal it came home to me the extent of this injustice. All clients have their own unique story of tragedy involving loss of life, liberty, reputation and in many instances loss of mind. No amount of compensation can put them back into the position they were before. It did, however, strike me what a humble and resolute group they were and it has been a privilege to be their solicitor.’ The Post Office said: ‘The Post Office sincerely apologises for serious failures in its historical conduct of prosecutions of postmasters, resulting in the Court of Appeal formally overturning convictions – that occurred between 2003 to 2013 – in uncontested appeals.’

Dealing with the media: ‘The media has been hugely supportive [but] even hardened journalists have struggled to comprehend the extent of the longstanding systemic behaviour of the Post Office. They are keen to tell those individual stories and ask questions of government and senior people in the Post Office as to accountability. The power of the media has already been demonstrated by key resignations, including Paula Vennells, former chief executive, stepping down from positions on boards in the last few days.’

Why become a lawyer? ‘I failed my A-levels and law was a glamorous new option at night class for retakes. I did well at it, and followed a path to university, finals and a training contract.’

Career high: ‘Probably marking 20 years in business at Hudgell Solicitors in 2017 and making The Times 200 Best Law Firms list in 2020. We’ve come a long way from a tiny office employing five people to a national firm in that time.’