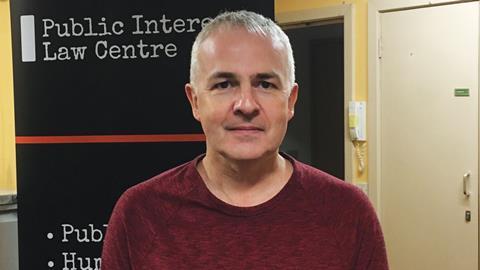 Why is he in the news? Represents housing campaigner Jerry Flynn, who is challenging Southwark Council in London over its Elephant & Castle regeneration project. Flynn argues that the plans provide minimal social housing. A judicial review was heard last month. The judgment is expected to be given soon.

Thoughts on the case: ‘The case centres on Southwark Council’s failure to force property developers to build more social housing in the regeneration of Elephant & Castle. In my client’s view the council has let the local community down. The council has been complicit in socially cleansing the area, which impacts on a large Latin American community, local traders and the working class community as a whole. Housing is no longer seen for its use value and ordinary people are being priced out of the city. This case highlights how London – indeed all cities – are gentrified for the benefit of the richest.’

Dealing with the media: ‘The Public Interest Law Centre has been fortunate because our client and campaigners from Up The Elephant, the 35% Campaign and Latin Elephant have played a great role in dealing with the media. We wouldn’t want it any other way. We encourage clients and campaigners that we represent to speak for themselves and to use the legal case as a platform to explain the injustice and inequality they face. The case has featured in the Guardian, BBC London News, local newspapers and across the internet. The response has been extremely positive: people understand that gentrification is an integral part of austerity and that it is a political choice, not an economic one.’

Why become a lawyer? ‘As a Marxist I wanted to use the law as a vehicle for social change. I accept it has limits, and I always try to advise clients and campaigners about those limits. The law and the courts are unfamiliar battlegrounds for the working class and the game is rigged, but the battle needs to be fought.’

Career high: ‘I have been fortunate to have acted in some important cases, such as securing migrant rights to student finance (Tigere) and in defending the human rights of homeless EEA nationals (Gureckis), but I think establishing the Public Interest Law Centre along with Helen Mowatt and Jean Demars has been massive. Being able to use law in the public interest for working class and marginalised communities is something I am very proud of.’

Career low: ‘I have been disappointed time and time again with decisions by the Legal Aid Agency because they seem reluctant to fund public interest cases. I know they have a job to do, but sometimes I wish they didn’t see lawyers as the enemy.’