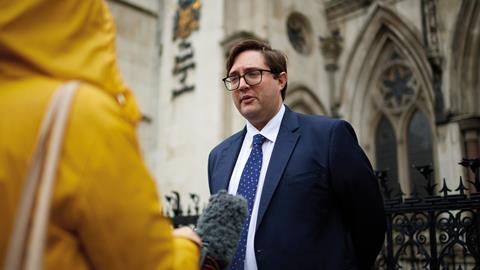 Why is he in the news? Secured a Court of Appeal ruling allowing 200,000 claimants to proceed with their case against mining giant BHP over Brazil’s worst environmental disaster, the 2015 collapse of the Fundao dam in Mariana, south-east Brazil.

Thoughts on the case: ‘The litigation has been a rollercoaster. The case is likely the largest single piece of litigation ever in the English and Welsh courts by numerosity of claimants and one of the highest in value. Mr Justice Turner held at first instance that the litigation was unmanageable, and that conclusion sat ill with my view of the English and Welsh courts as being the best in the world and capable of tackling any issue, no matter how complex. I was confident of the success of an appeal on numerous grounds. However, when the Court of Appeal first refused permission on the papers, my faith in the courts was tested. We therefore took the highly unusual step of applying under CPR 52.30 for a reconsideration of the application for permission to appeal and fast forward to today.’

BHP said in a statement that it will ‘continue to defend the UK group action’, which it described as ‘unnecessary because it duplicates matters’ covered by a compensation scheme and legal proceedings in Brazil.

Dealing with the media: ‘By and large, the media have been incredibly sympathetic [but] the solutions to disasters like Mariana are ultimately not to be found in the courts. The international media is key to persuading politicians, opinion formers and public policy-makers to introduce the requisite environmental standards and enforcement mechanisms to ensure tragedies like Mariana do not happen again.’

Why become a lawyer: ‘While I wanted to go into politics while young, I have realised that save for a very few positions in public life, one is more able to effect change through a career in the law.’

Career high: ‘Last Friday. Nothing can compare to the feeling of having had your case struck out as an abuse of process in the most strident of terms and then receiving a unanimous judgment from the Court of Appeal telling you that you weren’t crazy all along.’

Career low: ‘Representing a claimant at trial who had claimed to have lost a tooth in a road traffic accident but discovering during trial, after a forensic cross-examination from opposing counsel who had fully digested the claimant’s dental records, that she had in fact been kicked in the face by one of her own horses. This was a lesson to me!’