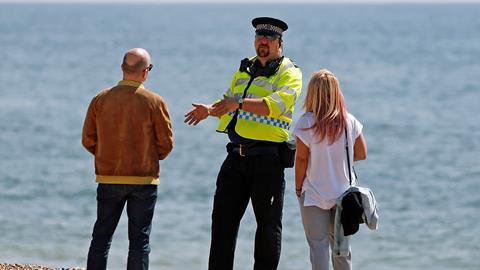 Fixed penalty notice for breach of lockdown: notifying the SRA

The Health Protection (Coronavirus, Restrictions) (England) Regulations 2020 (the Regulations), enacted on 26 March 2020, sets the scope of the stay-at-home measures with which we are now all familiar and the penalties for non-compliance. Regulation 6 places a restriction on leaving the place where you live ‘without reasonable excuse’ and Regulation 7 sets out the exceptions from the blanket restriction on participating in a gathering of more than two people in a public place. Regulation 9 stipulates that contravention of these is an offence, punishable on summary conviction by way of a fine. However, police officers (and other types of ‘authorised person’) can, instead, issue a fixed penalty notice (FPN) – also known as a Penalty Notice for Disorder (PND) - to anyone that they reasonably believe has committed an offence under the regulations.

The inconsistent approaches of different police forces to enforce these regulations has been widely reported, initially perhaps due to the lack of guidance in this area. That has now been rectified. However, ultimately still, the police are continuing to exercise their judgement dependent upon the circumstances of each individual encounter.

Driving to the country for a dogwalk, sun-bathing in the park through to altercations with family members at home all have the potential to attract a pandemic-related penalty. Clearly some misdemeanours might be regarded as more serious than others in normal times.

So where does this leave SRA-regulated individuals who are issued with a FPN for non-compliance with these regulations?

The obligation to report will need to be considered on a case-by-case basis, looking at all the circumstances in which the penalty notice has been issued. For example, to what extent did the individual fail to cooperate which led to the notice having to be issued –was it a last resort step as the individual had failed to heed a direction to head home, was this an isolated incident or has this individual been issued with more than one PND in respect of breaching these regulations?

It is also helpful to be reminded of the exact SRA requirements. In the SRA Code of Conduct for Solicitors, RELs and RFLs (the Code for Individuals), the relevant provision is Paragraph 7.7 - "You (must) report promptly to the SRA or another approved regulator, as appropriate, any facts or matters that you reasonably believe are capable of amounting to a serious breach of their regulatory arrangements by any person regulated by them (including you)."

The acid test is clearly then how serious the particular matter or conduct is as a breach of regulatory obligations. In essence, given this conduct will have taken place outside of professional practice, it is most likely to be a breach of Principle 2 (acting in a way which upholds public trust and confidence in the profession).

Whilst you might say that in usual circumstances, being issued with a PND would not be sufficiently serious in terms of a breach, we have to bear in mind that the current benchmark is not 'usual circumstances' given the strong sense of public duty in society joining together to fight the pandemic. With this, of course, comes heightened emotions, the potential for conduct to be called out by other members of the public and arguably a requirement that solicitors should be doing more not less to avoid damaging public trust and confidence in the profession. So on that basis, yet very much depending upon the circumstances in which the FPN was issued, it might well be argued that a FPN is something that should be reported to the SRA. It would, of course, be helpful if the SRA were to issue guidance on this issue.

It is also worth remembering that the obligation to report could be triggered by the SRA Assessment of Character and Suitability Rules, whereby rule 6.5 states you must 'tell the SRA promptly about anything that raises a question as to your character and suitability, or any change to information previously disclosed to the SRA in support of your application, after it has been made. This obligation continues once you have been admitted as a solicitor, registered as an REL or an RFL, or approved as a role holder.' The introduction to the rules makes clear that they are underpinned by the SRA’s role to act in the public interest.

Finally, the SRA’s enforcement strategy might be helpful in deciding on a solicitor’s obligation to report a lockdown related penalty. The document makes clear the SRA will focus its attention and will only take action in relation to breaches which are serious, either in isolation or because they demonstrate a persistent failure to comply or a concerning pattern of behaviour. The concept of 'serious breach', whilst not a defined term will include matters which can be described as serious, or conduct which falls well short of ethical standards.

In relation to conduct outside of practice and specifically, criminal conduct, the SRA adds that it will always investigate criminal convictions or cautions but that 'it is less likely to be concerned about behaviour which is at a low-level in terms of seriousness (for example, actions that result in fixed penalty notices…'). Crucially though, the SRA does not rule out taking any action in respect of such conduct and it will need to weigh up the seriousness of the offence and the circumstances in which the FPN was issued. So whilst a standard FPN might not routinely be of much interest to the SRA, the issuing of such a notice for failure to comply with the lockdown measures is not – based upon the police guidelines issued by the College of Policing – an immediate first step for police, and others, to take. It is very much the final stage of the four-phased police approach if engagement, education and encouragement fail. The SRA might therefore be asking itself why a notice needed to be issued in these circumstances. Did the individual fail to cooperate, which led to the officer having no option but to issue the FPN?

There is no hard and fast rule which states that every SRA regulated individual will need to notify the SRA that they have been issued with a FPN for contravening the emergency lockdown restrictions. But given the FPN/ PNDs being issued during the Covid-19 pandemic under the related regulations are not routine and may demonstrate a disregard of the public interest, it would be sensible for anyone in receipt of one to consider their obligation to report this to the SRA.