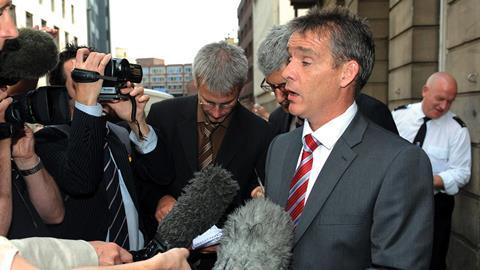 The claimants said that Northumbria Police owed PC David Rathband a duty of care to warn him of the threats made by Raoul Moat.

In July 2010, PC David Rathband was shot by Raoul Moat. Around 24 hours earlier, Moat had shot and injured his own former partner and killed another man. PC Rathband suffered horrific injuries, including total blindness, and tragically he committed suicide having begun an action against Northumbria police. His brother and sister continued the action on behalf of his estate and dependants.

The claimants said that Northumbria Police owed PC Rathband (pictured) a duty of care to warn him of the threats made by Moat; that they were negligent in failing to issue an immediate warning; and that if an appropriate warning had been issued, he would not have been so exposed to danger.

In Rathband v Northumbria Constabulary [2016] EWHC 181, Mr Justice Males said that PC Rathband had been well aware of the earlier shooting incident and he was also aware that Moat was a dangerous criminal. Just after midnight on 4 July 2010, Moat made a 999 call to the police and made threats to kill police officers. At that time, a superintendent Farrell was responsible for responding to this information.

She decided to analyse the information in the call and see if Moat’s location could be tracked. The issue was whether an interim warning should have been sent out immediately before these steps were taken. Moat’s call came in at 00.32.32 and came to an end at 00.34.37.

During that telephone conversation, at 00.36.10, the police obtained an approximate location for Moat, but it was too wide to be of any use. It was at 00.44.00 that PC Rathband radioed in to say that he had been shot.

The first issue related to a duty of care. Males J made reference to the benchmark cases of Caparo Industries Plc v Dickman [1990] 2 AC 605. While the requirements of foreseeability and proximity were satisfied in this case, there was an issue as to whether the imposition of a duty was fair, just and reasonable. Males J referred to a line of cases, beginning with Hill v Chief Constable of West Yorkshire [1989] 1 AC 53.

The decision which superintendent Farrell had to make in the present case involved a reaction to an unexpected and unforeseeable 999 call in the course of a complex and challenging police manhunt for a highly dangerous criminal wanted for murder. It was an operational decision which had to be taken under considerable pressure of time. To impose a duty of care owed to police officers in these circumstances would plainly give rise to a risk of defensive policing and would inhibit rapid decision-making. Consequently, there was no duty of care.

There might in appropriate circumstances be a claim under the Human Rights Act 1998 for infringement of article 2 (the right to life), or a private law claim under domestic law for misconduct in public office, but these had not been advanced in this case.

However, Males J went on to consider the issue of whether superintendent Farrell was negligent under a common law duty for not issuing an alert to police officers sooner. Evidence was given that the issue of such an alert would have a serious effect on the ability of the police to protect the public. One senior police officer went so far as to say that it would have been ‘foolhardy’ to issue a warning without first listening to the recording and trying to ascertain Moat’s location, and that there was nothing in what was reported to superintendent Farrell to suggest that Moat was likely to strike immediately.

Other witnesses said that while some commanders might have issued an immediate warning, it was not negligent not to do so. The claimants’ police expert had said that the need for an immediate warning was obvious, but Males J was not prepared to accept that view, given that he had no experience relevant to this issue and he had admitted that he could express no opinion on superintendent Farrell’s conduct or decision-making in that capacity.

It was also unclear as to precisely what kind of warning should have been issued. Males J found that superintendent Farrell had only 3½ minutes to avert the shooting of PC Rathband. He was extremely doubtful whether it would have been practicable within this short time to give even brief consideration to the pros and cons of issuing a warning, to formulate its terms and to give and implement the necessary instructions.

Even if it was practicable, the failure to do all these things in sufficient time before the expiry of 3½ minutes to give PC Rathband time to move away (assuming for the moment that he would have done so) could not possibly be regarded as negligent.

Males J then turned to causation. This issue involved a degree of speculation, as nobody could say with any confidence what PC Rathband would have done – on that point, the content of any warning was key. Males J was not persuaded that PC Rathband would probably have moved away from the location where he was parked, or at least that he would have done so almost immediately.

Given what was now known about the way in which Moat did in fact carry out his attack, it was doubtful whether additional vigilance would have made any difference. Consequently, the claim would be dismissed.