Attorney General Geoffrey Cox has advised that the legal risk of the UK being unable to exit the Irish ‘backstop’ remains ‘unchanged’, in what is being interpreted as a severe blow for the prime minister’s reworked EU withdrawal agreement.

Theresa May this morning said she had secured ‘legally binding’ changes to her Brexit deal, in what was a final effort to get Eurosceptic MPs to back it.

But in advice published earlier today Cox wrote: ‘The legal risk remains unchanged that if through no such demonstrable failure of either party, but simply because of intractable differences, that situation does arise, the UK would have, at least while the fundamental circumstances remained the same, no internationally lawful means of exiting the Protocol’s arrangements, save by agreement.’

Cox’s view broadly echoes the views of lawyers who were quick to pour scorn on the proposals earlier today ahead of a crucial Commons vote.

The Prime Minister said the changes would ensure that the so-called Irish backstop could not become permanent. The last time May’s withdrawal agreement was put to Parliament in January, it was voted down by a margin of 230. 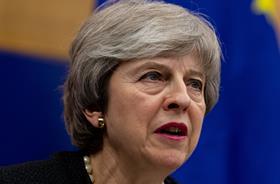 The main reason for the defeat was the backstop - an insurance policy designed to avoid a hard border in Ireland but which pro-Brexit MPs feared could result in Northern Ireland being treated differently from the rest of the UK.

A trio of barristers asked by the People’s Vote to advise on the legal effect of the changes slapped down the proposals this morning.

‘It is crystal clear that the measures do not alter the fundamental legal effect of the backstop, as previously and correctly explained by the Attorney General,’ they said. ’The backstop will endure indefinitely, unless and until superseded by another agreement, save in the extreme and unlikely event that in future negotiations the EU acts in bad faith in rejecting the UK’s demands.’

Barrister Sir Keir Starmer, shadow Brexit secretary, said the agreement does not include a mechanism for unilateral exit from – or termination of – the backstop (or any other part of the agreement) even where bad faith is made out. He said earlier he would be ‘surprised’ if the changes were sufficient to enable AG Cox to change his December legal advice in which he said that under international law the backstop ‘would endure indefinitely until a superseding agreement takes its place in whole or in part.’

Meanwhile Cox himself offered a robust and colourful response to speculation that he has already said May’s assurances would not work but had been told to ‘find a way to say yes’. Responding to a tweet along these lines from Channel 4 News anchor Jon Snow, Cox simply said: ‘Bollocks.’

Solicitor and Brexit commentator David Allen Green said the ‘hyped and spun proposals’ are ‘legally slight’. ‘The withdrawal agreement has not been re-opened. Nothing of substance has changed,’ he added.

Lawyers are not unanimous on the issue however. Tory MP Victoria Prentis, a qualified barrister, said: ‘Having looked at the legally binding changes in detail overnight, I think they solidify the terms of the withdrawal agreement. Really hope the deal will pass so we can move on.’