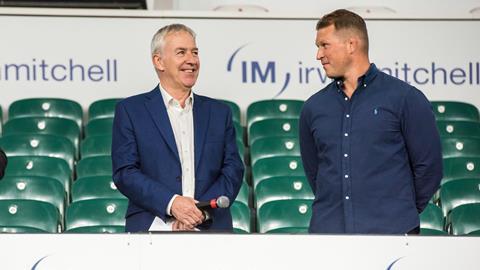 Dylan shows his Hart for a promotional appearance

While the England rugby squad prepare for their World Cup opener against Tonga on Sunday, spare a thought for former captain Dylan Hartley.

For his Thursday evening consisted of spending hours with lawyers and fielding questions about the injury that has robbed him of a place in Japan.

Hartley was the guest of honour for the announcement that Irwin Mitchell has become the official legal partner of England Rugby. Clients, staff and legal media were invited to Twickenham to enjoy drinks and a barbecue pitchside (two burly security guards made sure no one touched the hallowed turf).

The evening featured a haka performed by a Maori group (‘we’ve come all the way from Clapham Junction’ they joked), a pre-recorded message from England coach Eddie Jones, and a Q and A with Hartley.

The Northampton Saints hooker has a reputation for being forthright, so the proceedings were kept on-message through questions being exclusively asked by RFU director of professional rugby Nigel Melville.

Showing admirable patience (Melville twice asked about his injury, despite it being an obvious sore point) and no little wit, Hartley didn’t foot a wrong and predicted England would win the World Cup.

‘What about Scotland?’ came a voice from the audience.