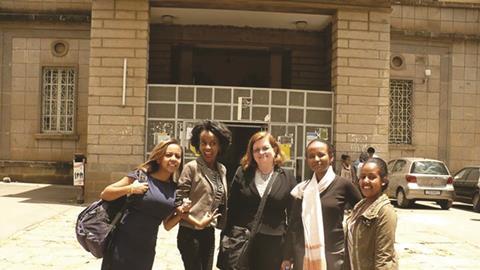 It was while working for the UN in Tanzania that Anne Bodley nurtured a vocation to help others less fortunate. Speaking to the Gazette about Lex:lead, the volunteer project she founded, Bodley recalls that when she was based in the east African nation she would often help locals with basic tasks – either buying mobile phones for those in need or taking people on trips to hospital.

‘A lot of people wanted to help if they saw someone who needed it,’ she says. ‘I think it’s human nature to help where you can.’

Since 2010 Bodley has been the president of Lex:lead, a charity that runs an annual essay competition for young aspiring law students in the world’s poorest countries.

To date the project has handed out more than 30 cash prizes to underprivileged students to help with their studies. Since 2015, the project has also placed students in internships (also funded by sponsor law firms). So far, placements have been taken at the World Bank in Washington DC and the Center for Water Security and Cooperation, also in the US capital.

A solicitor, Bodley spent many years working for magic circle firm Allen & Overy and now works for an international bank.

The idea of establishing Lex:lead was born out of her work at the International Bar Association. There she served as director of Global Challenge, a programme that promoted the law in the world’s least developed countries. When that project came to a close in 2010 the Australian native was inspired to continue its work.

She explained: ‘A student came to us to see if we could support him in getting a masters in law overseas. That’s when I had the thought that we could run an essay competition with scholarship money as the prize.’

Five years on, Lex:lead is giving around 65 students every year the chance to win a life-changing scholarship.

Winners get $500, paid for by donations from several international law firms and the IBA. The money can either be spent on material to help with studies or to pay education fees.

The competition is open to anyone studying law in any of the 47 countries on the UN’s ‘least developed’ list. The list consists of predominantly sub-Saharan African nations, though there are some in south-east Asia and the Middle East.

All candidates submit a five-page essay relating to particular topic on law and development.

‘$500 is pocket money for a law firm but does such a huge amount on the other end,’ Bodley explains. ‘The difference really is noticeable.’

In Ethiopia, for example, some students may finish their studies owing $1,000, which could take years to pay off even in full-time employment. ‘This prize fund would cut the time it takes to repay the money by half,’ Bodley points out.

The essays ask candidates to discuss how law can reduce poverty and improve economic development. In recent years topics have ranged from tax law to immigration law, while this year the focus is on banking regulatory law.

A team of judges, made up of volunteer lawyers, ambassadors and academics, is appointed to mark the submissions. Each essay is marked by three different judges to provide a composite score.

‘They [the judges] won’t know anything about applicants’ age or gender so all they can look at is the quality of the essays,’ Bodley explains.

‘Although it’s a relatively small initiative, to win something like this makes participants feel like they can really achieve something and it opens their eyes to their ability.

‘It has a real knock-on effect – if they believe they actually can do it then so do others. Word is starting to get out. Students are starting to see that the programme is real and applications are increasing.’

So where does Bodley see the project going in the future?

She has considered increasing the prize fund for winners as well as expanding the team of volunteers behind the project.

And she is not short of offers to help. At least one law firm has said it is interested in pledging more money. Several leading firms – including Allen & Overy, DLA Piper, Travers Smith, Addleshaw Goddard and Linklaters – already donate.

But there are, she explained, certain advantages to remaining small: ‘When I set up the project I said I wanted to be able to run it off a laptop, and I can. All we really are is a laptop, a bank account and a website. From just those three instruments alone we have been able to help so many people and open up a new world for them.’

Registration for this year’s essay competition, which asks how banking and regulatory law can reduce poverty and support economic development, is open until 30 November with the essays due in December. In February next year up to 10 winners will be announced.