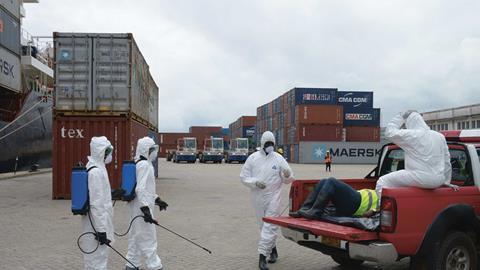 The Ebola outbreak has implications for international trade. Edward Hicks and Jasmin Sandhu look at the issues for ships, crews and ports.

The Ebola virus is posing many legal issues for shipping and international trade. As there is no immediate prospect of the outbreak coming to an end, it is advisable to take steps now to minimise exposure to potential risks.

The Ebola virus is a dangerous disease originally transmitted to humans from wild animals and also capable of transmission between humans. The disease has a high risk of death, killing 50%-90% of those infected. The latest outbreak, the most severe to date, is concentrated heavily in west African countries, including Guinea, Liberia, Nigeria and Sierra Leone.

Several shipping organisations, including the International Chamber of Shipping, the International Maritime Employers’ Council and the International Transport Workers’ Federation, have issued guidance on the risks associated with vessels calling at affected countries. The advice outlines a ship owner’s duty of care and the importance of crew safety. Recommendations include:

Industry leaders, including the World Health Organisation, International Air Travel Association, and the World Travel and Tourism Council, have issued statements regarding the outbreak to advise travellers of the symptoms, the risks, prevention, and treatment. A travel and transport taskforce has been set up to keep the situation under review and provide further updates.

Some of the legal issues arising out of the outbreak relevant to shipping and international trade are set out below. This is not exhaustive. In particular, all parties may wish to review the terms of their insurance policies (including protection and indemnity cover if applicable) to understand what duties they are under and for what losses they may be protected. Furthermore, in some cases local authorities may interpret contracts in accordance with local, rather than English, law.

Time charters will often contain express or implied safe port warranties, which will continue to apply despite the master’s duty to follow a charterer’s lawful orders. Under English law, the safety of a port is assessed at the point of nomination. For a port to be considered safe, the vessel must be able to reach it, use it and return from it. If the vessel is exposed to danger (unless it is an abnormal occurrence), that danger must be capable of being avoided by good navigation and seamanship.

English law has traditionally focused on the physical safety of the vessel and her cargo rather than the health of her crew. However, the question here would be whether, for a port to be unsafe, it is enough if there is a risk to the crew but no physical risk to the vessel. There are strong arguments either way as to whether a risk to the crew is enough to make a port unsafe.

There is also a conceivable hybrid argument that if the risk to the crew were severe enough, that could create a risk to the vessel. If the disease were to affect the crew, it could lead to a crew so depleted by illness that they could not safely man her. In view of these issues, owners may seek to raise legal arguments as to the safety of a nominated port in a country affected by the virus. Owners will need to consider two factors:

1. Is the port unsafe, in the legal sense? This will largely depend on the particular facts at the relevant time.

2. Can the master refuse to enter a port affected by Ebola? This will depend on the terms of the negotiated charterparty, for example, the existence of liberty clauses which allow a master to refuse to enter.

As to a charterer’s obligations under a time charter, where there is supervening unsafety, that is, a port is affected after the charterers have nominated it, they will be bound to renominate. The exact duty on voyage charterers has not yet been established by law, but it is open to the parties to agree a new port as a variation to the charterparty. All charterers should monitor port safety warnings and be aware of their obligations when nominating ports.

To avoid uncertainty in both time and voyage charters, parties may wish to draft appropriate clauses restricting vessels from calling at affected ports and dealing with supervening unsafety. Imposing trading limits may not be straightforward at a time when the number of countries reporting the presence of the disease is increasing, and may require drafting a specific clause dealing with the disease.

Liabilities for delay will depend on the relevant facts and the charterparty wording. Potential relevant causes of delay, which may even amount to force majeure, may include refusals to grant free pratique, refusal of pilots to board vessels arriving from affected areas, the placing of vessels under quarantine, port closures, or the refusal of members of the crew to visit affected ports.

It may be possible to anticipate and avoid delays. For example, South African port authorities reportedly require vessels to apply for free pratique three days before their expected arrival.

The WHO has published recommendations for precautions that owners can take to protect their vessels and crews, the adoption of which may also lead to delays. These include the declaration of sick crew members and passengers, a declaration of health for arriving vessels, and documentation of measures taken on board to reduce the risk of exposure.

The position under time charters – off hire

The charterer has a duty to pay hire continuously throughout the charter period, unless it can prove that an exception applies. This will depend on the individual charterparty terms and the nature, extent and impact of the relevant event. However:

Should the port medical authorities refuse entry to a vessel, the owners will need to look at the specific provisions of their charterparty, particularly in relation to the commencement of laytime whether in free pratique or not (WIFPON or even WWWW). However, if the delay is such that it frustrates the commercial purpose of the adventure, charterers may seek to rely on the doctrine of frustration to bring the charterparty to an end.

Where a vessel is under quarantine before laytime has commenced, time may not run because loading or discharge cannot commence. Owners and charterers will want to consider whether detention is instead applicable.

To pre-empt the above (and other) issues and avoid ambiguities, parties are advised to draft specific additional clauses to their contracts.

Port closures may lead to increased risks of delay, or deviation to alternative ports being necessary. Force majeure defences may be applicable. For example, in August 2014 contractors working on ArcelorMittal’s phase 2 expansion project in Liberia successfully declared force majeure and started moving workers out of the country because of the evolving situation. Parties may wish to draft appropriate force majeure clauses at this stage to avoid later uncertainty.

Parties should also take account of their obligations under respective bills of lading issued for the cargo carried on board. Delays or late delivery or deviations may lead to claims from cargo interests for damages for deterioration to cargo or landing cargo in the wrong place.

Owners’/carriers’ liability to third party cargo interests may be excepted under relevant provisions of article IV rule 2 of the Hague/Hague-Visby Rules. These may include ‘restraint of princes’; ‘quarantine restrictions’; ‘stoppage or restraint of labour from whatever cause’ (which may include industrial action because of fear of disease, and includes, without limitation, crew, stevedores, customs officials, sanitary officials); ‘saving life or attempting to save life’ and associated deviation.

Employers have a duty of care under individual contracts of employment. This duty has been reiterated in the various industry guidelines imposing stringent requirements on owners as a result of the outbreak. There is unlikely to be any significant impact on passenger claims since very few cruise ships visit the affected regions. Nonetheless, owners will need to bear traveller safety in mind and take the necessary precautions to prevent any passenger claims that arise from being outside the scope of their P&I insurance policies. Owners may also encounter difficulties and delays if crew members refuse to visit affected ports or ports in affected countries.

Nominated vessels may be rejected by counterparties if they have previously called at west African ports. In all cases, parties should be aware of their rights and obligations with regard to nominate or renomination of vessels and the applicable time limits, including pre-advice requirements.

Contractual parties may also experience variations in the prices of goods being exported into or out of affected areas, depending on the perceived risk of calling there to load or discharge. These variations may prompt parties to re-evaluate their existing contractual arrangements, and consider whether they wish to continue to be bound to their obligations.

Parties may seek to claim that performance has been prevented by a force majeure event. While this depends on the terms of the contract, in the case of the new standard form Grain and Feed Trade Association contracts this may prove difficult to argue, since the new ‘prevention of shipment’ clause does not automatically lead to cancellation of the contract but first allows a temporary suspension of the contract.

At this stage, it is far from clear how long the Ebola outbreak will last or which further countries it will affect. This leads to a great deal of uncertainty in the shipping industry, which must take precautions for the current situation but anticipate that greater quarantine and preventive measures may come into force in the future.

As there is no immediate prospect of the outbreak coming to an end, it is advisable to take steps now to minimise exposure to potential risks, including those set out in this article. This includes drafting appropriate charterparty and/or bill of lading clauses.

Most importantly, it is essential to keep up to date with warnings and guidance issued by port authorities, national and international authorities, and industry leaders, so that protective measures are implemented in a timely and consistent manner.