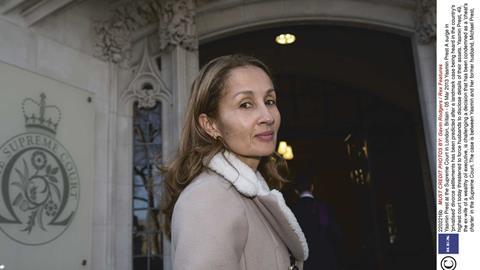 Men have every right to feel disillusioned with the family courts system.

For years family lawyers have known it to be true: men get a raw deal when they divorce in this country. And by this country, I mean England and Wales rather than the UK as a whole. Scotland has a very different approach to money in divorce and women rarely get the joint lives order (aka ‘meal ticket for life’) that we still see here.

And the prejudice against men is not confined to finance. More important, perhaps, is the way in which there is still no level playing field when it comes to deciding whether children should have their primary homes with their mothers or fathers.

‘There is no evidence of bias in the courts in favour of one parent,’ according to Baroness Butler-Sloss, ex-president of the Family Division, speaking during the committee stage of the Children and Families Bill in October. And apparently, the NSPCC, the Justice Select Committee and the children’s minister all agree with her. Who knew? Certainly none of my family lawyer colleagues. Where are these courts? Not in this jurisdiction. Maybe the baroness and her friends were muddling us up with, say, France or Sweden, where the field is considerably more level.

Our legislation is neutral and much of it admirable. Section 25 of the Matrimonial Causes Act 1973 contains an exhaustive yet flexible list of relevant factors when determining financial claims on divorce. Section 1 of the Children Act 1989 makes crystal clear that the court’s job is to establish the children’s best interests and then to protect them. But although the legislation is gender neutral, sadly the courts are not.

I base this observation on years of dealing with the family courts, almost exclusively in London, and witnessing countless examples of courts treating women and men in entirely different ways. I have acted for several fathers, for example, who have unarguably been the

primary carers of their children but have seen their contribution undervalued almost as a matter of course, with the court deciding the children should live with their mothers after divorce. And when it comes to spending time with their children, the message is clear: women and children first.

I have also represented numerous men in relation to finance who are stunned to learn that their relatively young, professionally qualified wives are seeking, and may be awarded, joint lives orders. Needless to say, I’ve found it almost impossible to persuade the court to award maintenance to husbands.

So how has it happened? Is it compensation on the part of the judges for the way women used to be treated in divorce, in families, in the workplace, in life? Some judges still seem to inhabit a 1950s world of soft, vulnerable wives in pinnies who need protecting. It is as if the last 50 years never happened, with equality of opportunity in education and in the workplace passing them by.

After White in 2000 (establishing the principle of equal sharing of assets on divorce), husbands in wealthy marriages began trying to protect themselves with pre-nuptial agreements. These were rarely effective until the Supreme Court heard Radmacher v Granatino in 2010. Since Radmacher, where a very wealthy German heiress succeeded in persuading the court to uphold her marriage contract, pre-nuptial agreements have carried significantly more weight.

This was a surprising decision at the time. Some felt the underlying reason was an acknowledgement that this was a European marriage contract entered into by a French husband and German wife that would have been binding in both their jurisdictions. Some of us posed the question: how would the Supreme Court have dealt with the case if the husband had been the one with the fortune? Would our protective judges have excluded the wife from sharing in the wealth? We suspected not.

In the Supreme Court decision in Prest v Petrodel last year, their lordships were terribly concerned at the prospect of keeping Mrs Prest (pictured) out of a substantial fortune that had been tied up in corporate structures during the marriage with a view to saving tax. They balked at piercing the corporate veil but chose instead to reinterpret the facts in such an imaginative way that trust and corporate lawyers are still coming to terms with their decision.

The judges were determined to protect Mrs Prest, at the expense of judicial clarity, by engaging in what could almost be described as an advanced game of judicial Twister.

Our overseas colleagues look on us with a mixture of amazement and envy. London is not called the divorce capital of the world for nothing. Wives with a tenuous connection to the city jump through hoops to avail themselves of our wife-friendly judges. As Boris Johnson said in November 2012: ‘I have no shame in saying to the injured spouses of the worlds’ billionaires, if you want to take him to the cleaners… take him to the cleaners in London. Because London cleaners will be grateful for your business.’

There have been rumblings to suggest at last that a change is in the air, and it cannot be too soon. More than three years ago, Baroness Deech made a bit of a stir when she expressed the view that she did not think it was in the interests of women, never mind men, that the courts were so protective of them.

Fathers4Justice prowling the rooftops of our public buildings in fancy dress have not helped the cause, but you can see why the father treated as a second-class citizen, or the hard-working husband now living in a bedsit, feels disillusioned. Our system is in denial and that includes the ex-president of the Family Division.

Philippa Dolan is a partner at Ashfords, London W1