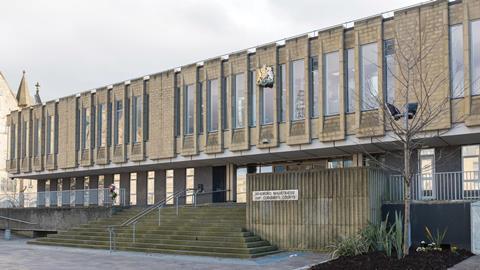 A baptism of fire in Bradford taught me some valuable lessons.

On my first day as a qualified solicitor, with all my exams and training behind me (or so I thought), I was sent by a partner in the Leeds firm I was working for to Bradford Magistrates’ Court to see a client in the cells.

I had been articled to the senior partner of the firm and spent my time as a trainee assisting with his contentious commercial litigation claims, complex conveyancing matters and a few high-profile divorces. In those days, lawyers didn’t specialise nearly as much as they do now so overall I’d been fortunate and had an excellent training in civil cases. But I’d never dealt with a criminal case before. I had never gone near a criminal courtroom during my training. I was assured it was straightforward (famous last words) and off I went to Bradford.

I went into the custody cells to see the client, ignoring as best I could the loud voices of police and prisoners shouting and swearing at each other in the sort of grim conditions I was unfamiliar with. My mind was fixed on the job and I spoke to the client in his cell. He was pretty hung over and bedraggled, leaning on the table while I sat quite gingerly on the other side, writing my notes. He could not say very much. He was a bit too drunk. I read from the charge sheet that he had no fixed address and no job. He was in custody for (drunkenly) beating his wife pretty badly and thus putting her in hospital. He was also in breach of a bail condition not to go near her, because he was also on bail for attacking her a few weeks earlier.

I filled in the legal aid forms and asked him (because from what I remembered of my criminal law I thought I should) whether he wanted me to apply for bail, and if so what he wanted me to say. I hoped he’d say no and that he would happily be remanded into the custody of HM Prison Armley, but that was obviously wishful thinking. Instead, I remember him saying: ‘Yes I do. That’s your job. I want to get out of here.’ So I smiled and said I’d do my best, leaving the cells no better informed or clearer in my mind what I was actually going to do than when I walked in.

The next thing I noticed as I walked into the large courtroom were some sharp-suited ‘hotshot’ lawyers. They were sitting with piles of files in front of them, making jokes and a lot of noise which stopped when I announced to the clerk who I was and why I was there. ‘This won’t take long,’ I heard one of the lawyers say to the clerk as they called my case. All of those men just sat staring at me as the client was brought into the dock and I stood up.

It was at that point I suddenly thought, ‘I’ve no idea at all what to say’. So I said: ‘Your worships, I’m instructed to apply for bail,’ smiled at them desperately and sat down again. Bail was duly refused, the client was taken into custody and the whole thing lasted a few minutes.

There was nothing I could think of to explain why the client should have his bail. He did not deserve bail, but at the same time I’ve never, ever forgotten the horror of it. There I was: a qualified solicitor way out of my depth for all the world to see. Actually, one of the more experienced lawyers was very nice. ‘There was nothing to say,’ he said – but who knows? A more experienced advocate would have at least put up some sort of an argument, or been firmer with the client.

For a while afterwards the thought of that experience – making a complete fool of myself – made me feel physically sick. I was right at the beginning of my career and the only way I could rationalise it was by telling myself it was ‘make-or-break’ time. Neither the lawyer who sent a manifestly inexperienced young lawyer to court, and was sitting sniggering behind his desk when I returned, nor the experience itself was going to break me. But it did cause me much stress for a long while afterwards and made me realise that qualified lawyers were only one day further on than non-qualifieds.

There was still an awful lot to learn. In fact, there is always a lot to learn. You never can say you know it all and those who think like that are fools.

Thirty-odd years later I’ve tackled complex cases in court, and regularly appeared live in the media before millions of people. That clueless girl no longer exists, except in my memory. We ensure all our newly qualifieds, and indeed all our lawyers, are treated with care. They are not overloaded and there is always a team around them to help. I hope none of them ever get to the stage where they crack. But when I read of the stresses and the dire consequences suffered by so many lawyers who, for many reasons, let their work get on top of them, I fully understand why they can and do crack under pressure. Some do terrible things and pay a heavy price.

I feel a profound sense of gratitude that – even during periods of the greatest stress and anxiety, handling huge cases on my own when I’ve had to work out what to do next and know the entire case depended on what I did – it didn’t happen. Cracking up, thankfully, never happened to me.

So, from my perspective, there but for the grace of… go we all.