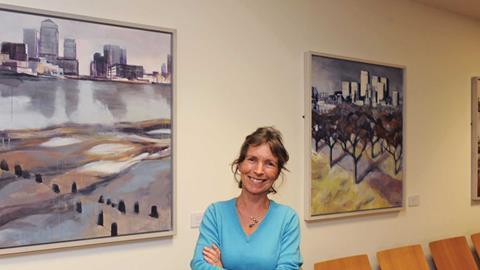 Pictures that tell a story

In early 2010 I was approached by two judges, the Rt Hon Dame Elizabeth Gloster and Dame Sonia Proudman, who asked if I could help them find art to put into the new Rolls Building, which was to be opened by the Queen in December 2011.

The building was to be the new home of the Chancery Division, Admiralty & Commercial Court and Technology & Construction Court. I was approached because of my long association with the world of heritage, writing and broadcasting about it and sitting on a number of national heritage committees. It soon became apparent that because the art required was going to hang in public spaces, it was unlikely that pictures would be loaned from national collections. I suggested that we create our own art for the building.

I was for over 20 years a founder trustee and deputy chairman of the Galleries of Justice in Nottingham, now the National Justice Museum, operating in Nottingham, Manchester and London, teaching young people about the criminal law. I therefore suggested that we consider using the new Rolls Building to teach young people about the commercial law. The judges agreed and in December 2010 we created a company limited by guarantee – the Rolls Building Art & Education Trust, which also became a registered charity.

The objectives of the trust are to fulfil such charitable purposes as would advance legal education of young people and the public in general through art and education projects; and through organising lectures, exhibitions and other educational events on matters of historic, artistic, architectural, social, aesthetic or scientific interest relating to the law.

By the time the Queen opened the new Rolls Building much art had been installed, including in the entrance to the building a very large panorama created by artist Nick McCann, based on the Rhinebeck panorama of early 19th century London. In addition, Neil Roland, a well-known photographer, produced a number of images informed by the work of the Rolls jurisdictions. These are displayed on the first, second and fifth floors.  Since the opening, more art has been installed, commissioned by the trustees and paid for by them or money they have raised through activities such as taking part in the London Legal Walk, seeking donations and private sponsorship.

We have added to the historic context of the building on the second floor with the display of the silver Admiralty oar, a visible sign of the authority of the Admiralty Court since the reign of Henry VII (1485-1509), traditionally displayed in court when the Admiralty Court is sitting. We also have the Scrutton memorabilia from the time of Thomas Edward Scrutton (1856-1934), who was a key figure in the development of the Commercial Court jurisdiction. We have a series of amusing legal prints on show donated by a retired judge, Nicholas Chambers QC.

We have also worked with the trustees of the permanent exhibition of judicial and legal costume at the Royal Courts of Justice. From time to time we give space to artists to have exhibitions in the building and believe we are in the vanguard of those public buildings displaying art for the benefit of the visiting public.

An important aspect of the trustees’ work is to provide education programmes through the year, making use of the courts to inform and engage young people in the civil justice system with particular reference to the High Court jurisdiction. These education programmes, free of charge to participating schools, take place three or four times a year and concentrate on those schools assessed as serving disadvantaged communities. The students are sent preparatory material, for example intellectual property cases and arbitration shipping insurance matters involving piracy, which are then the subject of a mock trials.

Feedback from teachers and pupils who have attended these education sessions has been very positive with high levels of increased interest and knowledge in the law. In one of our most recent surveys, 64% of students who attended indicated an increased willingness to pursue a legal career.  Recently, teachers commented that they appreciated ‘the chance to work in a real courtroom and develop a range of legal argument, and that students were engaged throughout and appreciated the judges’ encouraging words’. Some of our trustee judges give time to take part in the education sessions. Students have commented that attending a session was a unique opportunity and gave them an insight into what the law is about and shows how much impact the law has on everyday life. We also involve bar students in the educational sessions, working with claimants and defendant teams respectively with the ability to engage with them in a constructive rapport.

The trust has an association with the Sutton Trust’s Pathways to Law project to arrange student placements with High Court judges at the Rolls Building. Such students are from state schools serving areas of deprivation who are interested in a career in law and will be the first of their family to attend university.

There have been exhibitions of art in the building and most recently a new selection of paintings by Wendy Brooke-Smith of the Thames and the London skyline, which can be seen on the 3rd floor of the building. This year will see the creation of an exciting new piece of three-dimensional artwork by Sophie Arkette commissioned by the trustees. This original exhibit will reflect the artist’s interest in biotechnology and explore ethical and intellectual property issues as mediated through patent law. It is an ambitious project which combines sculptural forms in glass and metal with engraved text.