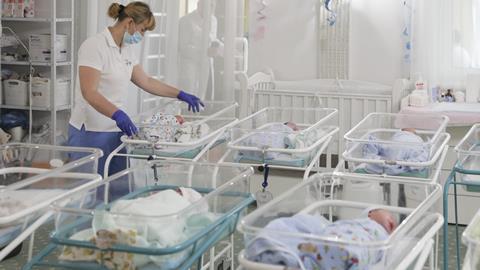 Naomi Angell, a member of the Law Society’s Children’s Law sub committee, examines the impact the Ukraine war can have on international surrogacy

With war comes devastation and destruction and lack of hope for the future. No more so than for the many Ukrainian surrogates carrying a baby for a family overseas.

These Ukrainian surrogates may be pregnant but unable to access medical care or give birth in safety, or they will be with a vulnerable new born.

This is equally so for intended parents from the UK and from many other countries who have turned to international surrogacy after many heartbreaking years of unsuccessful fertility treatment.

And of course the babies, born or unborn, into a world in chaos where it is not known when they will be able to join their new families who would normally be at their baby’s birth or soon after.

Surrogacy, either domestic or international, is now a pathway of choice for an increasing number of families unable to have their own children or for same-sex families who wish to have a child either as a single person or within a same sex relationship.

Surrogacy laws are mainly found in the Human Fertilisation and Embryology Act 2008 and have not kept pace with societal changes and the changing concept of family.

The Law Commission of England and Wales and the Scottish Law Commission are currently looking to overhaul this 30-year-old law, which they acknowledge is 'not fit for purpose'.

Why Ukraine and why international surrogacy?

The answer is multi-layered.

Surrogacy is lawful in the UK but only if altruistic, with the surrogate only receiving expenses from intended parents of the pregnancy, usually around £15,000.

There are too few women prepared to be surrogates in this country and there is the fear of both surrogates and intended parents that surrogacy arrangements are unenforceable.

Consequently, if the surrogate decides to keep the baby or the intended parents decide not to receive the child, complex litigation will follow to resolve the dispute.

For these reasons intended parents are increasingly looking to international surrogacy in countries that permit it. It is thought that around half of surrogacy arrangements in the Ukraine are now international.

Overseas commercial surrogacy has been approved by the High Court here with reported caselaw confirming that payments which clearly exceed expenses can be approved retrospectively, provided that there is not an abuse of public policy or the surrogacy arrangement has not circumvented our surrogacy and childcare law.

Ukraine and some states of the US have been the most popular destinations. In the US, surrogacy is a very expensive process, usually costing at least £100,000.

In contrast an international surrogacy arrangement in Ukraine could cost around £30,000, including payments to agencies, medical centres and the surrogates.

Even without the disruption of war, finding a way thorough the labyrinth of Ukrainian family and nationality law, as well as English immigration and surrogacy law, is far from straightforward.

Under Ukrainian law, the surrogate is not the legal parent and cannot pass Ukrainian nationality onto their child born by surrogacy. It is the intended parents who are legally the parents.

However, in English law it is the woman who gives birth, whether in this country or abroad, who is always the legal mother and if married, her husband is the legal father, unless he did not consent to the surrogacy.

This is the case even if there is no biological link between the surrogate and the baby, with donor or the intended mother’s eggs and usually the sperm of the intended father.

If the intended father is non-British the situation is much more complex and will require the skills of a specialist immigration lawyer.

In Ukraine the country’s government and court structures, along with surrogacy agencies, will have closed, as have the British diplomatic posts.

Consequently, it is impossible to obtain British passports or travel documents for the babies, leaving them stateless. Babies and their surrogate mothers will have taken flight to places of safety and will likely be out of contact with their agency and the intended parents.

According to reports, there are at least 40 British-based families in the middle of Ukrainian surrogacy arrangements and many families from other foreign countries unable to enter Ukraine to search for their surrogate and the baby.

The Times recently reported that 21 surrogate babies are being looked after by nurses in Ukraine as the war has made it impossible for their intended parents to reach them.

Responding to this humanitarian crisis, the UK’s Home Office have made special arrangements for a surrogate, her immediate family and the surrogate babies and for pregnant surrogates.

They will be granted entry visas to come to the UK outside the immigration rules on the grounds of exceptional circumstances. If the baby has British nationality this will be addressed once the baby is in this country.

This is undoubtedly helpful but the surrogates, particularly if still in Ukraine, will have difficulties in applying for a visa or travel documents and will join the queue of the countless refugees hoping to find safety while they are not able to live in their home country.

Pictured above: Babies born to surrogate mothers in Ukraine wait for their parents (Kyiv, May 2020)

Naomi Angell is a consultant at Osbornes Law and heads its adoption, surrogacy and fertility law unit. She is also a member of the Law Society’s children’s law subcommittee