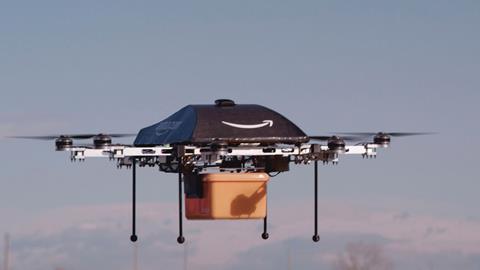 Consumer usage of drones (or unmanned aircraft systems – UASs) is becoming increasingly widespread, but problems regarding safety and security have started to emerge. For example, on 1 April last year the UK Civil Aviation Authority (CAA) successfully prosecuted a man for flying his UAS over a BAE Systems submarine-testing facility, the result being a fine of £800 plus a £3,500 costs award.

Similarly, in the US, the Federal Aviation Administration (FAA) fined someone $10,000 for flying their UAS near the University of Virginia campus. Perhaps more worryingly, sightings have been reported by the flight crew of commercial airliners of UASs, flying in close proximity to their aircraft during their approach to land at JFK International Airport in New York.

These worrying trends suggest that the current regulatory infrastructure is inadequate to prevent a serious risk to safety – particularly the safety of airline passengers. With Amazon and Google currently carrying out UAS test flights, it appears that widespread commercial usage is also on the horizon, particularly in relation to cargo delivery. This is the context in which the current regulations are being reviewed.

These are defined as ‘small unmanned aircraft’ and, according to article 253 of the ANO, are exempt from the majority of regulations that apply to manned aircraft – for example, operators do not have to register them or seek airworthiness approval. However, article 138 of the ANO applies equally to all aircraft: ‘A person must not recklessly or negligently cause or permit an aircraft to endanger any person or property.’

The specific regulations for small unmanned aircraft are contained in articles 166 and 167 of the ANO. The key provisions state that the operator must maintain direct visual contact with the aircraft and must not fly the aircraft:

Drones weighing more than 20kg up to and including 150kg

These are defined as ‘light unmanned aircraft’ and are subject to regulation as though they were manned aircraft. Accordingly, they must comply with the requirements relating to airworthiness, registration, permission to fly and pilot qualification. If an aircraft cannot comply with all of these requirements, the CAA may be prepared to issue an Exemption under article 242 of the ANO.

These are regulated by the EASA and are subject to stricter regulation than small or light unmanned aircraft. EC Regulation 216/2008 sets out the relevant rules. These relate to airworthiness certification, continuing airworthiness, operations, pilot licensing, air traffic management and aerodromes.

Before the extensive freight/cargo-related capabilities of these UASs can be realised, substantial investment costs, which currently render them commercially unattractive, must be reduced.

Issues to be addressed

In December 2013, Amazon announced its intention to use UASs to deliver goods weighing up to 5lb (2.3kg). There is an immediate obstacle to this idea under current UK regulations, in that a UAS must remain within the pilot’s line of sight. Further, it appears that cargo delivery would rely on integration into controlled airspace (both national and international). On 8 April 2014, the EC adopted a communication regarding the integration of unmanned aircraft into European airspace and on 8 October 2014 the EU’s Transport, Telecoms and Energy Council established that the following issues must be resolved before integration is possible.

Once UASs obtain sufficiently sophisticated technology so as to avoid collision with people, structures, terrain or other aircraft, a set of minimum system requirements will need to be codified. At present, CAP 722 states that ‘if the UAS industry is to produce UASs capable of operating in all classes of airspace, it is essential that detect and avoid issues are addressed, and that they demonstrate equivalence to the regulatory and airworthiness standards that are set for manned aircraft’.

David Omand, chairman of the University of Birmingham policy commission and a former director of GCHQ, has highlighted the possible usage of UASs for general criminal, including terrorist, intent. A House of Lords select committee is discussing whether to adapt current criminal legislation accordingly.

UASs are also likely to require their own segregated parts of the radio spectrum. Such communications must be protected against hacking, jamming and ‘spoofing’ (whereby UASs could be misdirected to false co-ordinates).

There is also uncertainty as to whether UASs can be identified via radar depending on their size and the materials from which they are made.

There is concern regarding the enhanced surveillance capabilities of UASs. There is no criminal privacy law in the UK, but an act of ‘spying’ could potentially constitute an offence of voyeurism under the Sexual Offences Act 2003. UAS surveillance capabilities in general are dealt with under existing CCTV legislation, for example the Data Protection Act 1998. The House of Lords select committee is also discussing whether this legislation needs to be updated to deal with the more active nature of UAS surveillance.

The EC is also assessing how data protection rules should apply to UASs, and there is an expectation that data protection authorities will be responsible for monitoring the collection and processing of such data.

EU regulation 785/2004 on insurance requirements for air carriers and aircraft operators (including UASs) provides for minimum insurance cover in respect of third-party liability by reference to the weight of the aircraft. Article 2(b) states that the regulation does not apply to model aircraft weighing less than 20kg (and CAP 722 confirms this) meaning that, as a matter of law, there are currently no minimum insurance requirements in respect of small unmanned aircraft in the UK.

A Teal Group market study from 2012 predicted that total worldwide spending for UAS is expected to reach $89.1bn over the next 10 years, led by strong military and commercial demand. Europe and the US are two of the three biggest manufacturers of UASs globally (the third being Israel), so there is a clear time pressure to devise an appropriate regulatory infrastructure if this potential is to be unlocked effectively.

There is at present no deadline set as to the outcome of discussions in the House of Lords or at EU level. In the US, Congress has ordered the FAA to produce a set of rules by 30 September to provide for the commercial usage of UASs. Given the shared prominence of US and European manufacturers it can be expected that Europe will be working to a similar time frame.