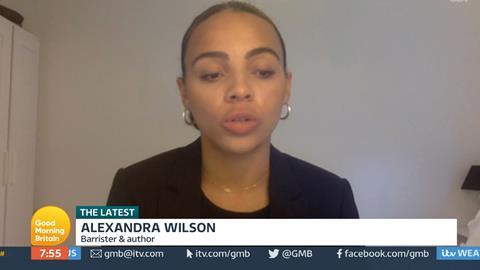 A barrister’s fraught journey through the ranks

In Black and White: A Young Barrister’s Story of Race and Class in a Broken Justice System

Alexandra Wilson’s book is a personal account of her journey as an aspiring barrister and the many challenges she experienced along the way as a mixed-race woman.

Her experiences are a powerful reminder of how much has changed within the legal profession and of how much has remained the same. Her description of the criminal justice system and the legal profession is told through her experiences as a fledgling barrister and through some fascinating cases that she participated in. The book explores serious issues of racism, sexism and class which continue to blight the legal system.

Wilson’s journey as a barrister was inspired by the tragic death of a loved one to knife crime. This seismic event would drive her forward when at times her experiences within the profession proved challenging, as did the negative reaction of some family members when she announced her intention to become a barrister. The book is uncompromising in its analysis of the issues plaguing the justice system. Wilson discusses the perennial problem of underfunding and the increasing number of litigants who are left unrepresented as a result. She also draws attention to the disturbing plight of young offenders, some of whom were most unfortunate to have found themselves prosecuted rather than diverted from the criminal justice system.

The book discusses one of the key issues of our time, namely the need for greater diversity and inclusion within the justice system and in other areas of our society. Wilson gives the example of black clients who felt reassured by her representing them in a system that appeared alienating and intimidating.

The book provides the non-lawyer with a helpful explanation of some of the rules, principles and customs that underpin the legal profession, including some of the more unusual ones.

It is also a must-read for anyone considering a career as a barrister, not least because it illustrates how much work and dedication is required to succeed. Alexandra’s trials and tribulations as a pupil barrister are at times disturbing and at the same time hilarious. She gives an example of working so diligently in chambers late one evening that she found herself alone with no key and no means of exiting the building, an experience many practitioners have endured!

At the heart of this book is the sense that the legal system is still failing to meet the need for fairness, inclusion and diversity. In fact, since writing her book, the author has been the victim of racial prejudice at a magistrates’ court which was widely publicised. A sign, no doubt, of how far the system still has to go in overcoming prejudice and racism.

Alistair Fell is a barrister at Red Lion Chambers