A comic take on legal ideologies

When I began reading The Chameleon Shuffle, it appeared to be a light-hearted, witty novel permeated with streams of legality. Perhaps the change in the political climate in the US and the indirect ‘standstill’ society is currently facing during the pandemic have caused me to consume the novel differently. The Chameleon Shuffle quickly became, to me at least, a thought-provoking satire on the two extreme threads that underpin most democratic legal systems: conservatism and liberalism. 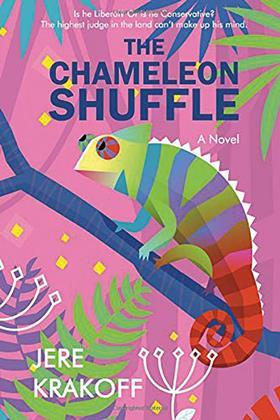 The themes of conservatism and liberalism are turned on their head through the protagonist Leonard Zweig. He struggles with his ‘legal consciousness’ due to perceiving himself as a hybrid; unable to fully commit to a side.

Krakoff pokes fun at Leonard’s hybridism through his comical use of ridiculous characters who simply cannot comprehend hybridism as a concept. At one stage a psychological evaluation of Leonard is ordered to ensure all the proverbial cognitive ‘wheels’ are still turning, as his professors had never encountered anything quite as ridiculous. As much as I found the novel hilarious, giggling at the ludicrousness of some characters, I ruminated over some of the statements made. It is most definitely a thought-provoking read, for Krakoff cleverly utilises his command of satire to make statements about the legal system that are cloaked in wit.

He relishes poking fun at those who rigidly embed themselves in one doctrine of thought, and also at the inflexibility of the profession. This made me question the merit of adopting a staunch ideological approach to one’s own society and the practices of the legal industry we have become accustomed to.

Although the novel is set in a fictional town, New Rottendam, one cannot mistake allusions to the US and UK legal systems weaved into the story.

This makes the novel a non-confrontational mirror on our own personal ideologies and how we engage with others who do not share our own leanings. Krakoff is a balanced comic however, poking fun at both sides of the legal spectrum, including the corporate versus the pro-bono spheres.

I highly recommend this work to fellow legal eagles who are after a dry-witted legal novel that pokes fun at some aspects of the industry, that they without a doubt have encountered at some stage. However, it is so funny and brilliant, I think anyone, regardless of profession, could relate to the novel and enjoy it too.