A new front in the war against legislative overload

Red Tape: Managing Excess in Law, Regulation and the Courts 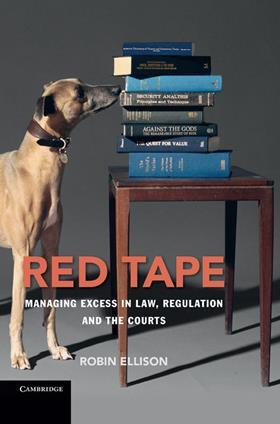 The premise of this book is that there is too much law and a lot of that is not good. Essentially, it is an extensive study of excessive red tape. Bad law leads to more bureaucracy and irritation among the public, who largely ignore it, leading in turn to more laws to remedy the problems caused by the first lot.

Whenever something bad happens the temptation for lawmakers is to make more laws, thinking the law can prevent the bad things from happening again. Terrorism is a case in point. Each outrage is followed by new laws, but there are plenty of mundane examples of bonkers rules and regs: it is an offence to use noisy remote-controlled vehicles in Hillingdon; to cover your face in Sefton; to draw pavement art in Swindon; to occupy a camping van in Wolverhampton; and even to carry a golf bag in parts of Derbyshire. In addition, many new laws are unnecessary, as the behaviour being outlawed is covered by other legislation.

Many countries have attempted to address increases in laws – for instance in 2015 the Red Tape Reduction Act was enacted in Canada – but odd laws continue to breed. In Scotland, the Apologies (Scotland) Act 2016 ensures an apology is no longer an indication of fault, or an admission of liability. Apparently there are similar statutes in other countries, but is such a law really necessary? Does the absence of such an act in England mean there is more risk to saying sorry?

This book contains sections on lawmakers’ compulsion to legislate and the counterview that the law cannot fix everything. There are chapters on regulation and regulators, as well as courts and our profession. The author, Robin Ellison, also has suggestions for the future.

Ellison’s background is in commercial pensions. As pensions legislation has increased from around 100 pages in the early 1970s to around 160,000 pages today, he knows of what he speaks.

This is an excellent book that we can all benefit from. Although regulation and statute law can be a dry area, Red Tape is loaded with excellent and entertaining examples of lawmakers’ stupidity. Any book that refers to Tom Bingham and the Ladybird Book of Red Tape should be warmly welcomed. Buy two, and send one to your MP!

David Pickup is a partner at Aylesbury-based Pickup & Scott