BOOK REVIEW: A state within a state?

The appearance of James Comey (former director of the FBI) before the Senate Select Committee on Intelligence in June perhaps raised more questions than provided answers about the FBI’s perspective on president Trump. However, readers of Professor Glennon’s short but elegantly argued thesis might have interpreted the exchanges differently.

The title suggests conspiracy, but the substance is more prosaic. Rooted in post-second-world-war reforms introduced by president Truman, the national security apparatus of the US now consists of multiple separate organisations and hundreds of thousands of employees. In attempting to explain certain continuities in practice between the Bush and Obama administrations, Glennon’s thesis is that key constitutional bodies – Congress, the president and the Senate – which purport to wield power are actually making pre-determined decisions within parameters selected by the national security services, with their own constant and self-interested agendas: ‘The real choices [are] being made by technocrats… who present options… [the members of those constitutional bodies] are in no position to assess.’ Hence the notion of double government: a shadow service defining national security choices for visible bodies, both affirming the need for their presence and ensuring particular outcomes. 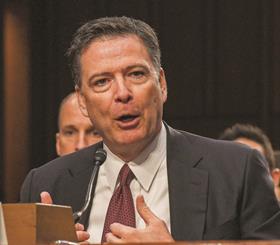 An example of a failure of oversight of interest to lawyers is the discussion of the Foreign Intelligence Surveillance Court, the closed court charged primarily with hearing requests for electronic surveillance. It approved, Glennon tells us, almost all requests made between 1979 and 2013 and, according to a Guardian report (20 April 2016), failed to turn down a single request in 2015.

There is no offer of a practical solution to the problem of double government in this sphere. Glennon agitates generally for galvanisation of a more engaged electorate – the problem being how to incentivise participation if the perception is that nothing changes.

This is an interesting lens through which to view current US upheaval. If correct, the discontent with the status quo that has been widely touted as the reason for Trump’s success might be something more – an underlying uneasiness that there is a ‘state within a state’. Indeed, the warning that process and bureaucracy require a rejection by the people of ‘authoritarian demagoguery’ seems to be a prescient murmur of the ‘drain the swamp’ language of the Trump campaign (political differences aside). Whatever one’s political persuasion, Glennon’s thesis queries the extent to which public exchanges, such as Comey’s SSCI sitting, are influenced by institutions operating behind the veil of national security.