Changing the world is not easy, it is not quick, and it is not for the faint-hearted or thin-skinned. That is the message of lawyer-turned-politician Harriet Harman’s chronicle of her political life. This is an earnest but engaging account of the successes of the women’s movement, alongside the development and events of Harman’s own long career.

The changes in law and public policy that have made a difference to women’s lives and moved us all closer to equality in the workplace, the home and the public sphere did not happen by chance. They came about because women like Harman became lawmakers and made them happen.

There are good observations in the book about the law, its interaction with politics and its centrality to the project of changing the world. At the beginning of Harman’s legal career, it is logic, problem-solving and working out where responsibility lies that draw her in. Once she realises that she can use her legal qualification as a way of pursuing social justice and tackling inequality, rather than as a means of upholding the status quo (as at the Westminster-based firm where she did her articles), her path is set. 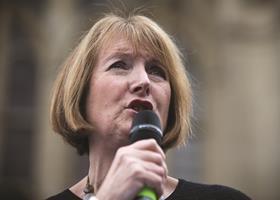 Warned by colleagues in parliament not to allow herself to be ‘pigeonholed’ by speaking up too repetitively on things perceived as ‘women’s issues’ – childcare, equal pay, domestic violence – Harman nonetheless dedicated her career to campaigning for equality. Ignored or jeered at for her efforts – by her political opponents and the media, naturally, but also by many men on her own side – she carried on regardless, all the way to the Equality Act of 2010, which she took through parliament in the final days of the last Labour government.

Over the course of her political career, Harman has held a variety of roles and portfolios in opposition and then in government. She rises, falls, then rises again. It is when she returns to government as solicitor general in 2001 that she seems to find her niche. She uses the role as an opportunity to focus on the way that the criminal justice system addresses domestic violence – and this is one of her most notable legacies.

The book gives very little insight into Harman as a private individual. There is a distinct lack of gossip and personal stories. But there is a lack of vindictiveness too, and a prevailing loyalty to the Labour party and her colleagues (Peter Mandelson being an exception). She is guarded about herself, in the main, which is probably a reflection of how she has had to live her political life for more than three decades: focusing on the issues that drive her, avoiding any suggestion of being lightweight or frivolous, protecting her family, and constantly proving – like most women have to – her worth and her right to be there.

Catriona Moore is policy officer at a national charity.