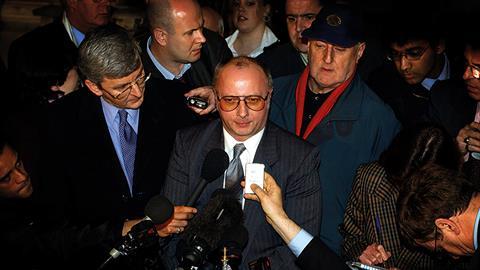 Facts made to fit the suspect

The Case of Stephen Downing: the worst miscarriage of justice in British history

This is a true story of one man’s fight to clear his name. Stories like the one told in this book are the very reason I pursued a career as a criminal defence lawyer. Against the odds and with perseverance and a dogged determination, Stephen Downing (pictured outside the High Court) eventually managed to overturn his murder conviction.

In September 1973, Wendy Sewell’s bloodied body was found seriously injured in a graveyard in the small town of Bakewell. Downing, a young groundskeeper, found her and ran to get help. Sadly, she died, and Downing found himself arrested on suspicion of her murder. Seventeen-year-old Downing had learning difficulties, and with no legal representation or access to his parents, he signed a confession to a crime he did not commit. He was ultimately convicted of Sewell’s murder.

This is the story of one man’s determination to challenge the system and to ultimately prove his innocence. There are interesting extracts from case papers and photographs, enabling the reader to gain a fuller understanding of Downing and his plight.

Against the odds his break came when a local newspaper reporter looked into the case. What was discovered was disturbing: buried evidence not disclosed to the defence that contradicted the signed confession, and a police force desperate to make the facts fit their suspect.

Downing served 27 years in prison for a crime he did not commit. His story provides a telling insight into our prison system, as well as historical information about some of the establishments that I found both interesting and enlightening. Repeatedly refusing to admit to a crime he did not do, he was denied the opportunity of release. Instead, he educated himself and obtained his case papers with a view to preparing his defence and re-examining the case afresh.

This is not the typical true crime book, but the memoir of a man failed by the criminal justice system and police force of the time. Described as the longest miscarriage of justice in British legal history, it was certainly well worth reading and absorbing.