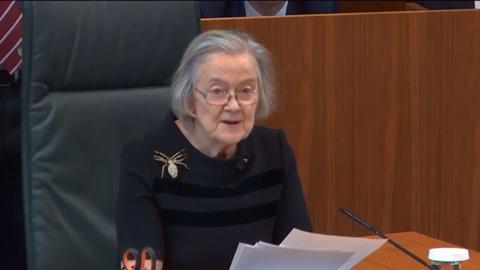 A Theory of the Executive Branch: Tension and Legality

The tensions between the executive and the judiciary have been highlighted in the UK and US in recent years, with concerns that both Boris Johnson and Donald Trump have been guilty of overreaching their powers.

Much has happened since Lady Hale (pictured) delivered the Supreme Court’s judgment that the prime minister’s decision to suspend parliament was unlawful. But at the time it triggered a backlash from some quarters to the effect that the judiciary were an unelected elite interfering in politics. Meanwhile, Trump’s administration was frequently being blocked by judges, much to the president’s chagrin. Trump skewed the US Supreme Court in the Republicans’ favour by appointing conservative-minded justices.

So where should the line be drawn? In Margit Cohn’s study she convincingly argues that there is inherently ‘fuzzy’ law due to the executive being both subservient to law and dominant over it. This fuzziness stems from constitutions, legislators and executives. She analyses the problems, but also the benefits, of this situation, with specific examples drawn mainly from the US and UK.

Cohn concludes that measures need to be in place to prevent the executive branch abusing its power, and she advocates increased participation from the judiciary.

This book is a well-researched and structured warning that the fuzziness of the law is open to exploitation and realpolitik by governments. It uses case studies of emergency law and air pollution law in the UK and the US to vividly illustrate this. The conclusion that the judiciary is best placed to counter this highlights the concern that the Trump administration and now the Johnson government, with the support of politically sympathetic media outlets, have made concerted efforts to subvert the judiciary and undermine their authority.

Lee Wall is a solicitor with Irvings Law in Liverpool