Stay on top of discipline

The third edition of Kenneth Hamer’s Professional Conduct Casebook is now available. The first edition was published in 2013 and the second in 2015.

The new edition contains 85 chapters, compared with 71 in the last edition. Some existing chapters have been divided into two, such as Dishonesty (General Principles) and Dishonesty (Sanction). Many chapters have been extensively rewritten, including Drafting of Charges, Human Rights, Impairment, Misconduct and the chapters on Sanctions. The result is that the book now runs to 1,203 pages, compared with the 821 of the second edition. Thinner paper has been used, however, so it will take up less space on a shelf. 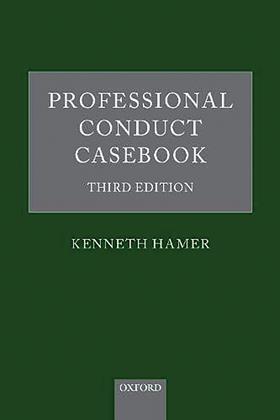 New chapters in this edition include Amendment, Integrity (Lack of), Language (Knowledge of English), Notice of Proceedings and Proportionality.

Two innovations will be of particular use to practitioners. A new structure has been adopted, with many chapters being divided into health, legal, and other professional cases grouped separately so as to be easily identified. Second, there is a very helpful summary at the end of each chapter which seeks to bring together the relevant legal principles and key cases in the chapter. In future editions, it may be sensible to promote this to the beginning of the chapter.

The margin notes to many of the cases have been largely rewritten and expanded, to enable the reader to see at a glance the critical features of the case. The case law is up to date as at 1 March 2019 and the third edition includes a supplement at the rear of the book.

I have always found the Casebook extremely useful when researching the law on a particular point. One knows that if there is a useful case on the point in question, Hamer will have noticed it and noted it.

The book is of great value to practitioners, and I am sure that this edition will be as well received as the others.