Warts-and-all despatches from a broken system

Nothing But The Truth: Stories of Crime, Guilt and the Loss of Innocence

Sometimes, in court, a witness has anonymity. No one can report their name. No one can report their address. Avoiding ‘jigsaw’ identification – someone piecing wider clues together – is trickier. I hope The Secret Barrister considered the jigsaw super-sleuths when he wrote his third book, Nothing but the Truth. It is part diary, part memoir and very personal. A risky business for one trading in anonymity. The marketing has certainly been clever. ‘Cover to be revealed’, one early advert ambiguously teased. I read it twice. Did they mean the book’s artwork or something more?

The bad news, first. Anyone hoping for a positive identification of Our Learned Friend is going to be disappointed. I raced to the back page and there is neither photo nor name. The good news is that you will be disappointed by little else.

If the first book was about the system, the second about the law, then this gem is about the person. About people. And it is all the better for it.

We canter alongside Secret Student Barrister. He is young, annoying and unsure of himself. But he is sure of his opinions on crime (there is too much of it) and punishment (not enough of it). He is at a job fair (networking with a ‘rotund pinstriped cliche’); he is on a mini-pupillage (getting hit on the head by the court car park barrier); he is at bar school (encountering braying ‘Three-piece-suit W*nkers’); he is doing compulsory inn dinners (the fancy butter in ‘funny shapes’); and, finally, he wins the prize of pupillage.

And off he goes. 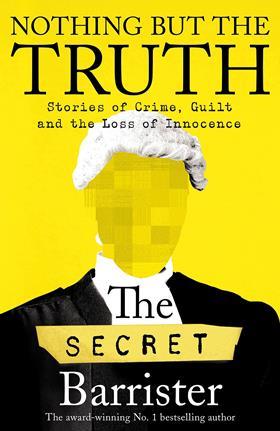 Competing in the ‘spandexless version of Gladiators’, he, somehow, converts it into a tenancy. He builds a practice, navigates difficult judges, legal aid cuts, a savage workload and daily human heartbreak. Somewhere along the line, our author realises his views about punishment and policy are shifting. He is changing. Altered by the system and its flaws. Transformed by people and their stories.

You begin to recognise the characters, even if you do not know their names. The ‘grizzled warhorse’ advocate. The rhinoceros-skinned pupil supervisor. The grandstanding judge. Because the author is anonymous, they are anonymous. But it does not matter a jot. We know who they are. We know who he means. We recognise them. You begin turning the pages, searching for yourself, and wondering – am I one of the good guys?

For those of us in the job, we have walked many of SB’s roads before. It is no less terrifying, gut-wrenching or exhilarating the second time around. For those on the outside, I suspect it will be eye-opening.

The candour is, at times, breath-taking. I cannot imagine what was left on the editor’s floor. This is not a work of bland legal drafting – it is both human and urgent. When Adam Kay pulled back the curtain on the NHS with his tell-all book (This is Going to Hurt), he published it having left the job. The Secret Barrister – who, as far as we know, can still be found in a courtroom near you – must be relying on their anonymity holding out. Precisely no words have been minced. I choked on my tea at some of the revelations and unprintable four-letter flourishes. They certainly did not make their way into the Radio 4 breakfast serialisation slot.

For that reason, this book will have critics. Expect some degree of legal profession friendly-fire and mutterings about the solemnity of the law. But for every toe-curling story in this book, there is a beautiful one. For every ugly caricature, a hero. From a wildly successful author, self-deprecation. And, from the cushion of anonymity, a no-holds-barred book that tells an unvarnished story of a broken system and the people who hold it together.