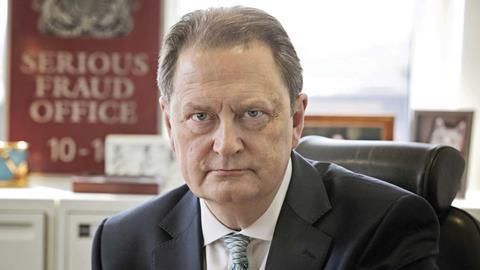 Departed SFO director put the much-maligned agency back on track. So what of its future?

When David Green QC became director of the Serious Fraud Office (SFO) six years ago, he inherited an organisation which – to put it mildly – had lost its way. Amid budget cuts, low morale and speculation over its future, the SFO was fast heading for an embarrassing defeat in its highly publicised criminal investigation into the Tchenguiz brothers and the collapse of Kaupthing Bank.

Green stepped down this month. His successor has been appointed but is yet to be announced, which indicates – perhaps surprisingly – that it is not someone from within the SFO’s ranks. Chief operating officer Mark Thompson has just taken over as interim director. So what key decisions marked Green’s tenure and what lies ahead for the SFO?

Determined to begin with a clean slate and to ‘recharge the SFO’s corporate self-respect’, Green set out his stall early on with decisive action. He discontinued the Tchenguiz investigation, cutting his losses in a spectacularly bungled case which would end up costing the SFO over £4.5m. He launched a full criminal investigation into the manipulation of Libor which, although it has yielded mixed results at best, sent a much-needed message that the SFO was now taking on the cases it was set up to prosecute rather than focusing on low-level frauds better suited to the Crown Prosecution Service. He reopened the SFO investigation into the $600m collapse of Weavering Capital, later securing the conviction of its founding director. He also issued new guidance on corporate self-reporting, emphasising that a self-report by a company was no guarantee it would not be prosecuted. These were all clean breaks with – and in some cases blatant reversals of – the decisions of his predecessor.

Green has without doubt presided over a drastic shift in emphasis at the SFO towards more traditional investigation and prosecution of corporate offending. The SFO had previously attracted criticism for its heavy reliance on self-reporting, plea negotiations and civil settlements as alternatives to prosecution, particularly in relation to corruption cases which were often dealt with by way of admissions to lesser ‘books and records’ offences. While Green has since embraced the introduction of deferred prosecution agreements (DPAs) as an alternative to the prosecution of corporate offenders, he was keen to demonstrate that DPAs are not the ‘soft option’ and that they will only be considered where a company has shown genuine and proactive cooperation.

Outside the DPA regime, Green launched a number of high-profile investigations and prosecutions. He secured some notable convictions, including former UBS and Citigroup trader Tom Hayes for the manipulation of Yen Libor, and the recent guilty plea of ex-Deutsche Bank trader Christian Bittar in connection with the manipulation of Euribor. Despite some setbacks, the SFO under Green has made its mark as a credible prosecutor of corporate crime. Whoever takes over on a permanent basis will inherit an agency that is back on track.

That is not to say that the new director has an easy task. For a start, procedural slowness at the SFO remains a problem. A lack of resources is partly to blame for this, though Green has gone some way to addressing that obstacle through a more dynamic approach to staffing cases and a willingness to go cap-in-hand to the Treasury to seek additional ‘blockbuster’ funding for specific cases.

Another factor slowing down investigations is the global reach of the Bribery Act. Since 2011 this has made evidence-gathering more dependent on bureaucratic channels of mutual legal assistance between states. However, it is notable that some of the oldest investigations on the SFO’s books are UK-focused and therefore not hindered in this way. It is to be hoped that Green’s successor, in addition to prioritising a review of the SFO’s longest-running investigations, will take steps to speed up the conduct of investigations more generally.

Green will be credited with securing the UK’s first four DPAs, but the next director will be instrumental in setting the regime’s future course. The challenge now will be to create sufficient incentives for companies to self-report suspected misconduct while ensuring that DPAs do not become viewed as a cop-out on the part of the SFO. It is possible that the next few years will see an increase in the penalty discounts available to companies that enter into DPAs, and that in appropriate cases the 50% discount afforded to Rolls-Royce for its ‘extraordinary cooperation’ will cease to be the high watermark.

Another game-changer for corporate prosecutions and the DPA regime could be the extension of the Bribery Act’s corporate ‘failure to prevent’ offence to other forms of economic crime – a move that Green repeatedly called for. The government is examining the options and there are no indications as to timing, but there is every possibility that the SFO’s next director will preside over a wholesale reform of the law on corporate criminal liability.

While Green appears to have headed off the threat of the SFO being subsumed into the National Crime Agency, government plans to create a National Economic Crime Centre with the power to instruct the SFO to investigate cases suggest that the agency is not completely out of the woods. It remains to be seen how this proposal will work in practice, but it is something that the new director is likely to have high on their agenda.

The new director will also be acutely aware that certain key decisions taken by Green will play out on their watch and may yet unravel. Green’s tough line on claims of litigation privilege over investigation material has become a hallmark of his tenure and was endorsed in a High Court ruling last year, but it is far from certain that this will be upheld on appeal this summer. Likewise, Green has initiated some highly publicised prosecutions that have yet to come to trial. Next year will see the trial of Barclays and some of its former executives for alleged fraud in relation to the bank’s dealings with Qatar during its 2008 capital raisings. Barclays says it will defend itself against the charges. The retrial of three former Tesco executives for alleged fraud and alleged false accounting may also occur during the next director’s tenure. All three deny the charges. While Green is right to say that the SFO deals with complex cases and should not be judged solely on its conviction rate, given its uncertain future it has a lot riding on the outcome of those trials.

The results of Green’s mission to bring the organisation to the top of its game will be assessed in no small part through his successor’s ability to tackle these early challenges.

Elly Proudlock is counsel and Oliver Beeley an associate at Linklaters