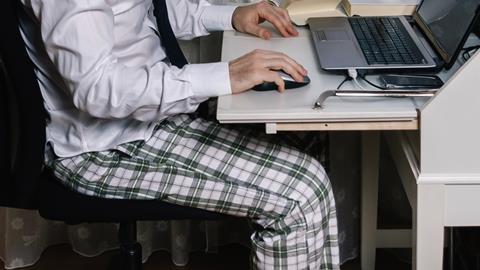 And the judge wore pyjama trousers

For hundreds of years, court hearings have been conducted in majestic court rooms: large oak-panelled spaces, lined with shelves full of bound volumes of law reports, the judge sitting high on the judicial bench, barristers often in their wigs and gowns, solicitors and counsel behind them, and a witness box with a bible and other holy books for taking the oath. Not now. Not any time soon. We have been thrown into a brave new world of remote court hearings.

We have spent much of the last two weeks in a 'virtual' court, with a judge hearing our client’s case remotely. Believed to be the first financial remedy divorce trial conducted in this way – at least that’s what the judge said, and who contradicts a judge? – it has proved that agile lawyers can move efficiently and effectively into an entirely new and very different way of working. And it was different, very different in some ways, but it was also very familiar in other respects.

Our client’s case – let’s call him Mr. Smith – had been listed for trial long ago. It’s a complex case and was therefore estimated to last eight or nine days, commencing on 23 March 2020. A senior High Court judge had been allocated to hear it. A week before the starting date, he informed us that because of personal factors linked to Covid-19 he would not now be available to try the case. An adjournment loomed. To re-fix the trial would produce a new hearing date many months ahead, probably in 2021. Having already waited many months for this hearing, the delay was unacceptable to both parties and likely to add substantially to the costs. So, what, with the assistance of counsel’s clerks, did we arrange and how did it work?

No full-time judge being available at short notice, a deputy High Court judge was appointed to hear the case. The trial was conducted remotely, via Zoom, the facility which few had heard of a month ago but which everyone knows about now (and everyone wishes they had bought shares in!). The judge was in his house in the Home Counties; the two leading counsel were in their respective homes, as were junior counsel, the various solicitors, and of course the parties. Instead of umpteen lever-arch files, most participants in our trial used electronic bundles, which had been indexed and bookmarked.

Two other points may be useful. First, the usual 'note passing' was plainly not going to be viable. We therefore established a WhatsApp group consisting of all of our legal team, except leading counsel, and our client. Leading counsel was omitted to spare him too much distraction, but there was a filtered conduit between him and junior counsel which allowed the more important points to be passed on. Second, each morning, 30 minutes before the hearing was due to start, we had a test of the system with the judge and all participants to check that all was working as it should be and to allow an opportunity for resolving any gremlins. There were none.

Aside from the mechanics and details, the method was a success. Not only did it preserve the hearing date and avoid a long adjournment, the technology worked. Everyone who needed to be seen and heard could be. Others could hear and see everything. Witnesses gave evidence from wherever they were: Mrs Smith from the former matrimonial home in London, Mr Smith from his new home not far away, an expert accountant who had valued the business gave evidence from her home in Devon, and another witness from somewhere far away overseas. One interesting facet was that, unlike in a conventional court, by video-link each witness’s face was 'up close' and very observable, showing expressions with greater than usual clarity.

Now for the pyjama trousers in our title. Despite the fact that all participants were in their respective homes, not in the Royal Courts of Justice, everyone appeared to dress pretty much as if they were in an actual, not a virtual court: shirts, ties and jackets for the men; smart court wear for the women. But the video cameras were upper-body only. We know that at least one lawyer was wearing his jeans and we would have been none the wiser if the judge still had his pyjama trousers on. In this brave new world, you can now attend court in pyjama bottoms, but otherwise the formality and efficacy of the process is as it ever was.

Will this period of remote hearings last beyond the current crisis? Probably not; at least not in the main. We are likely to revert to the conventional method for most hearings, in particular trials of any length and substance. There may be more remote hearings of short and less complex matters, just as there have been telephone hearings occasionally in the past, but we do not see the Royal Court of Justice, or other courts, being moth-balled any time soon. However, for the duration of the current Covid-19 crisis, remote hearings will be the rule, not the exception. Such is clear not only from the obviousness of the present restrictions, but also from a raft of judicial practice directions, formal guidance, and so forth, which followed the hearing.