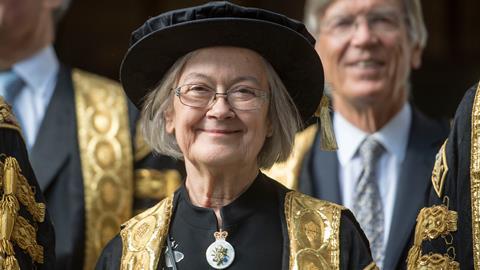 'From one girly-swot to another'

When your Ladyship first asked me to speak today, I was frankly faint with delight, then immediately petrified. How could I possibly do justice to your incredible career in a few minutes? So, I will only focus on the enormous impact you have had on women in the law and beyond. And, of course, it is particularly apt that we celebrate your career and legacy just five days before the centenary of women being able to enter the legal profession.

As the first woman to achieve many prominent positions you are a powerful role model who has inspired countless women to believe that no part of the profession is beyond their reach.

Inspiring women in the profession

Speaking personally, you have been the inspiration for every step of my career- from when, as a teenager in 1985, I read your transformative book on women in the law, to the 1990s as a young children rights lawyer, when that brilliant piece of child-centred legislation which you authored- The Children Act was, and continues to be, our bible. I remember the first time I heard you speak in 2005 - inspiring, self-deprecating and funny in equal measure. And I finally meet you properly at the Law Society in 2014 when you gave an impassioned speech about women in the judiciary. I have had the privilege of working alongside you on many occasions since then. I am so personally grateful for your leadership and support.

You inspired my career, my campaigning and because of you, I, and - I know for a fact - countless others in the legal profession, have also been empowered to make a small dent for equality in the universe.

You have consistently lived up to your own words: 'pioneering women must champion the cause of women generally'.

We have followed your wise lead, taken your words to heart and tried to live out these values in our own work.

But you’ve made it easy for us- never shying away from what needed to be said but doing so in such an amiable and intellectually compelling way that it makes it difficult for anyone to disagree.

Let’s take the case of greater diversity in our judiciary. Eloquent as ever you argued that 'the judiciary should reflect the whole community, not just a small section of it. The public should be able to feel that the courts are their courts; that their cases are being decided and the law is being made by people like them, and not by some alien beings from another planet.'

You have advocated the need for the judiciary to address gender inequality in its ranks to ensure it stands for one of its core values - equality. But, pragmatic as ever, you’ve been clear that proper representation of women in the judiciary is simply an 'efficient use of talent'.

And you have always been gracious and generous in your approach- quick to praise others including those male champions who have been true allies in the fight for gender equality- 'those wonderful men who understood and sympathised with our situation'. As you said: 'You do not have to be a woman to be a feminist.'

You have been an inspiration for so very many male lawyers too.

But your influence has, of course, extended far beyond our profession.

Indeed, it has given birth to what has been dubbed the 'Brenda Agenda'.

Put simply- by you- that 'we should all enjoy the same rights and freedoms; but that women’s lives are necessarily sometimes different from men’s and the experience of leading those lives is just as valid and important in shaping the law as is the experience of men’s lives.'

The emphasis you have placed on recognising the unique perspectives and experiences of women in interpreting the law has brought both societal shift and real justice to countless women who have come before the courts.

This fresh and welcome approach has seen you:

Seeing things from a woman’s perspective and valuing that perspective has made a huge difference and because of you, we have a fairer, more equal legal system.

Inspiring the next generation

As a feminist, a lawyer and a leader, you have been a huge inspiration to so many of us.

But I want to focus on your generosity of spirit, particularly towards the next generation. A colleague told me of a time when she brought a group of young Marshall Scholars to the Supreme Court for a guided tour. Once the tour concluded, and at the end of a long day in court, to the scholars’ delight you spent 2 hours with them, your genuine warmth and interest in their questions never waning for a moment.

This kindness with your time is certainly not a one off. Just this year, you have spoken at 54 events where you are often surrounded by students, junior and not-so-junior lawyers seeking to meet their hero.

Your dear friend and PA, Ayo Onatade, also told me how you regularly get requests for work experience, mainly from young girls, and whilst formal shadowing isn’t allowed, you invite as many as possible to come to the Supreme Court to spend a day with you.

Indeed, this generosity will certainly be missed by those that have worked alongside you. Ayo also spoke of her pride in working with you, the thoughtful flowers when moving to a new house and the (nice) telling off for working at the weekends or the odd late night.

Your legacy however stretches far beyond the courtroom. Many will know that you now star in a children’s book Equal to Everything – Judge Brenda and the Supreme Court.

The book is about a little girl from Richmond who worked hard and eventually became the highest judge in the land. It highlights how Judge Brenda is very different from some other judges being female, state educated and having followed a non-traditional career path.

I have no doubt, it will inspire many children to dream and to plan for careers that they and their parents might not have thought possible.

The fandom does not stop at literature. We can now all purchase our Lady Hale t-shirts, spider brooches and girly swot necklaces on Etsy!

The respect and warmth the legal profession has for you, Brenda, really cannot be overestimated. We thank you for being a pioneer, the best advert for women in the law and the judiciary, and for showing that women’s presence in our legal system is not just nice to have but a necessity to ensure that our experiences have equal weight in shaping our law. 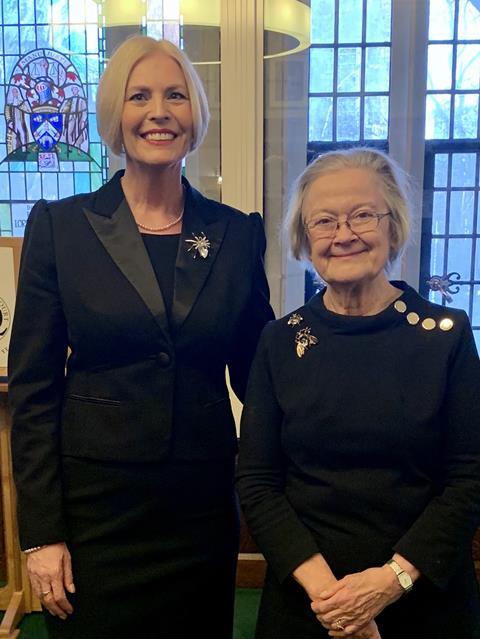 As someone who introduced children centric legal decision making to our society, I thought it was apt that we hear from the daughter of our mutual friend Dana Denis-Smith – the inspirational founder of the First 100 Years project which you have long championed. Alma Constance - aged 8- described you as a 'nice lady and very inspiring, kind, very thoughtful; she really thinks of other people and is very supportive.'

And that’s spot on as your legacy is not just about your career feats but a different type of leadership full of integrity, generosity and humanity.

Recently at a Law Society event organised to celebrate the centenary of women in the law, you finished your speech by saying that many old battles have been won but there are plenty of new ones. I am sure I am not alone in eagerly anticipating the new challenges you will now fearlessly turn to. Perhaps the next children’s book should be titled ‘What Brenda did next’?

Whatever you do, count on our support.

On behalf of the three law societies, may I wish you the very best for the future. The judiciary’s loss will certainly be the legislature’s gain and we look forward to your motto of 'women are equal to everything' continuing to guide our respective work in campaigning for equality in the law, in the judiciary and in our wider society.

And finally, from one girly-swot to another, and on behalf of all those girly-swots in our country, in sisterhood and with great respect and love - thank you.

Christina Blacklaws, immediate past president of the Law Society