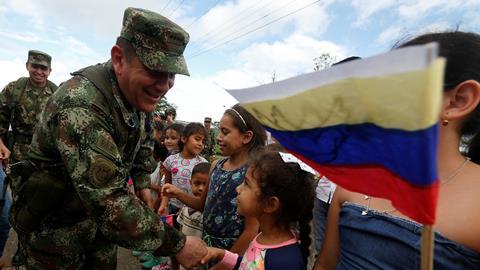 On 1 May 2017 the UN High Commissioner for Human Rights, Zeid Ra’ad Al Hussein, gave a press conference in which he sought to raise awareness of the risks faced by human rights defenders globally. Colombia was cited as a country of particular concern. In the first four months of 2017, the High Commissioner has received 41 reports of assassinations of human rights defenders in Colombia, an alarming increase on the previous year. What makes these figures particularly concerning is that this coincides with the beginning of the implementation of the peace accord with the Fuerzas Armadas Revolucionarias de Colombia – Ejército del Pueblo (FARC-EP).

The peace accord will facilitate the demobilisation of FARC-EP and political participation for a limited number of its former members. The accord envisions the implementation of a complex and ambitious process of transitional justice.

Colombia has more experience of transitional justice than most countries. In the past, amnesties have been used as a pragmatic solution for achieving peace; this is seen as far back as 1958 when an end was finally achieved to the 10-year period of political violence known as La Violencia and, more recently, in the peace agreement finally achieved with the M-19 guerillas in 1990. However, international law and opinion increasingly rejects blanket amnesties for the most serious international crimes, requiring that such offences are at the least investigated and, where possible, prosecuted. This was reflected in the 2005 Justice and Peace Law, which aimed to facilitate the demobilisation of the paramilitary umbrella group the Autodefensas Unidas de Colombia (AUC), instead of amnesties the law capped sentences for those that admitted offences at eight years’ imprisonment.

The law is generally perceived to have been a failure. Proceedings are ongoing but, in April 2017 the Colombian newspaper El Tiempo reported that of the 4,410 paramilitaries that officially demobilised under the Justice and Peace Law, more than half were excluded from the judicial process for various reasons and, from the 1,943 remaining cases, there have been only 47 sentences.

The current proposals will see the creation of a ‘Special Jurisdiction for Peace’ which, over a 10-year period, will process the huge number of crimes alleged to have been committed during the conflict with FARC-EP. Genocide, crimes against humanity and war crimes are excluded from receiving amnesties. Defendants that make full and timely admissions to these categories of offences will receive sentences of between five and eight years in ‘special conditions’ which will see them avoiding ordinary prisons but confined to a defined area and required to carry out reparatory works in the community. Those who make late admissions of guilt will be detained in ordinary conditions for between five and eight years and those who are convicted after contested proceedings will receive sentences of between eight and 20 years in ordinary conditions.

Running alongside the Special Jurisdiction for the Peace will be the non-judicial ‘Commission for Truth, Reconciliation and Non-Repetition’ which will investigate and produce a report on what happened during the conflict with the aim of realising the victims’ ‘right to truth’ and to promote reconciliation.

Victim participation will be essential if the proposals are to succeed and human rights defenders will be vital, not only for representation before the various tribunals but more fundamentally to secure the participation of the victims, particularly in marginalised communities, such as the Afro-Colombian and indigenous populations which have been disproportionately affected by the conflict.

The recent case of Bernado Cuero Bravo is illustrative of the assassinations. A member and legal representative of various victim’s groups including the National Association of Internally Displaced African Descendants (Afrodes), he was assassinated in front of family and friends on 7 June 2017. Cuero Bravo had made several requests for assistance from the National Unit of Protection, the state organisation responsible for offering protective measures to those deemed at risk. However the measures previously offered (a bullet proof jacket and a mobile phone) had been withdrawn as he was not deemed to be at high risk.

On 14 June 2017 the Colombian attorney-general issued a directive aimed at improving the protection of human rights defenders and social leaders. It remains to be seen whether the directive is effective in meeting its aims but early signs are not encouraging. On 21 June Mauricio Fernando López Vélez, vice president of the Union of Workers at Public Universities was assassinated after being taken from his family’s farm and on 1 July Alberto Román Acosta, also a trade union leader, was killed by gunmen while he watched a football match with his son.

Establishing whether these killings are a systematic attempt at destabilising the peace process will be a complex process. Those tasked with that investigation and those responsible for implementing the various protective measures essential if these killings are to be stopped will need to be both properly resourced and backed by real political will that goes beyond mere rhetoric.

Rachel Rushby is a consultant at Murrays Partnership.