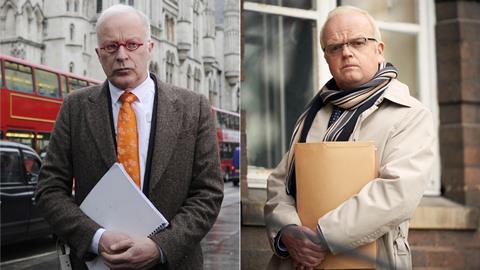 The BBC2 drama Danny Boy, which aired on Wednesday evening, was an outstanding piece of drama, showcasing the bravery of those who served in Iraq and the  inadequate care shown towards those same individuals when they returned to the UK.

Their return, in addition, was also greeted with serious allegations of murder and torture from human rights lawyers – most notably Phil Shiner, owner of Public Interest Lawyers and now a former solicitor.

Shiner was portrayed by Toby Jones as a committed but chaotic campaigner, working long into the night, surviving on shop-bought sandwiches and surrounded by mountains of paperwork in offices that were far too small for him (‘having the walls closing in concentrates the mind’, he responded, when asked if he should move somewhere bigger).

For a drama which centred on the story of the unjustly accused solider Brian Wood, the early stages were notably sympathetic to the lawyer who was behind those accusations. Jones’ Shiner was passionate and keen to hold the British forces to the highest standard – a far cry from the ‘tank-chasing’ label his detractors would place on him.

Shiner was portrayed as motivated to the point of obsession, and seemed intoxicated by the allegations of serious crimes presented to him by a journalist. But this conviction was also his downfall. Evidence was not properly assessed, witnesses were believed seemingly without question, and professional judgement was clouded. Eventually we know this drive would be his downfall, as Shiner offered financial benefits to a third party for him to change his evidence to the Al-Sweady inquiry, which ultimately rejected claims that soldiers tortured and murdered Iraqi civilians. Shiner was struck off and his firm collapsed, his career disappearing in ignominy and anger from those he pursued. Those who supported him at the time, including it should be noted this publication, can be justified in feeling let down by Shiner’s moral compass being adjusted when it came to his own conduct.

It is a cautionary tale for all lawyers to act with the head as well as the heart. A passion for the cause you are pursuing can be a great asset, but it must also be treated with caution. Shiner was described in the drama as ‘naïve at best and mendacious at worst’ by a colleague, and even his biggest supporter would concede the first of those descriptions at least. He was blinkered, fanatical and sloppy. The evidence should have been scrutinised and doubted – instead Shiner took it as proof to support his existing beliefs and failed in his professional duty as a result.

It remains essential that lawyers hold the government and its armed forces to account. But those doing so must always keep in mind this is a legal process and not just a moral crusade.