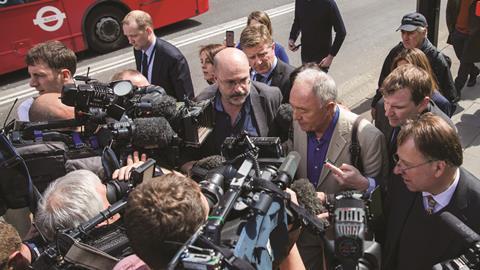 Freedom of speech is one of the easiest of human rights to understand but one of the most difficult to legislate. Remember those debates about Tony Blair’s attempts to criminalise the glorification of terrorism or the Danish cartoons? Well, there are still some issues left over in relation to allegations of antisemitism, issues illustrated in Ken Livingstone’s recent foray into Hitler’s alleged relationship with Zionism; the reports of Lady Chakrabarti, the House of Commons Home Affairs Committee and the government’s response; as well as a thoughtful intervention by retired Court of Appeal judge Sir Stephen Sedley in the London Review of Books (4 May).

The European Convention on Human Rights contains a reasonable codification of traditional English common law on freedom of speech (with the exception of the outdated bit about morals): ‘Everyone has the right to freedom of expression… [which] since it carries with it duties and responsibilities, may be subject to such formalities, conditions, restrictions or penalties as are prescribed by law and are necessary in a democratic society, in the interests of national security, territorial integrity or public safety, for the prevention of disorder or crime, for the protection of health or morals, for the protection of the reputation or rights of others, for preventing the disclosure of information received in confidence, or for maintaining the authority and impartiality of the judiciary.’

Two points are relevant here. First, start exploring the fringes of acceptable comment and you realise how much apparent sub-text matters. Second, moving on to other incidences, never mind subtle allusion, some of the abuse recorded by the Home Affairs Committee as thrown at Jewish MPs is horrific.

It recorded that Luciana Berger MP had been targeted by a US-based neo-Nazi website; received 2,500 abusive tweets in three days; and was sent texts – one a death threat (‘You will get it like Jo Cox did’) and another asserting that ‘Hitler was right’ – which led to two people ultimately being sentenced to terms of imprisonment. The report reproduces some of the tweets: they are unspeakable.

Returning to Livingstone, the debate has moved a long way from what he actually said: ‘Let’s remember when Hitler won his election in 1932, his policy then was that Jews should be moved to Israel. He was supporting Zionism – this before he went mad and ended up killing six million Jews.’ His reading of history is controversial; seemingly intended to be offensive in its apparent implication of an alliance between Zionism and Nazism; and an inaccurate reflection of Hitler’s consistent demonisation of Jews, described in Mein Kampf as ‘the personification of the devil and the symbol of all evil’.

The objection to Livingstone’s remarks is more that they broke the spirit of Article 10 than were unlawful. The correct response for the Labour leadership would have been to rebuke him for gross insensitivity and to disassociate itself from any implication that Hitler’s views were ever anything but mad. It might have seemed like a political masterstroke at the time to bring in Chakrabarti to clean up the mess, but she got mired in questions that she would not answer to the House of Commons committee about any link between her appointment and her peerage. Her report’s recommendations were remarkably bureaucratic. She argued for a general counsel for the party and a legal committee as watchdogs over expressions of views.

Some of the abuse thrown at Jewish MPs is horrific.

The Commons committee began with the basics and considered, as Chakrabarti did not, a definition of antisemitism. This is where we encounter the link between antisemitism and hostility to the state of Israel, with Sir Stephen Sedley entering the fray. He pointed out that the committee wanted two clarifications to the usually accepted definition, to make it clear that it is not antisemitic to criticise the government of Israel or to hold it ‘to the same standards as other liberal democracies… without additional evidence to suggest antisemitic intent’.

The government disagreed. It felt that it was sufficient to say that ‘criticism of Israel similar to that levelled against any other country cannot be regarded as antisemitic’. That raises an issue still to be fully explored.

The notion that a particular state is, in some ways, inherently more favoured than others is strikingly common. It permeated much 19th-century thinking about the British empire and underlies current expressions of ‘American exceptionalism’. It carries particular dangers and should be openly confronted. So too should any attempt to argue that Hitler was not a consistently vile racist.

Some views may be lawfully but unacceptably expressed, not least because they can trigger the kind of abuse that is not. Political parties and politicians should tread with particular care.