The contempt of Stephen Yaxley-Lennon

Nobody seems to have come out very well from the Tommy Robinson case. What went wrong?

Stephen Yaxley-Lennon (Robinson’s real name) fell foul of contempt laws in May 2017. The ex-leader of the English Defence League went to Canterbury intending to film four men on trial for rape. That was thwarted when the judge arranged for the defendants and jury to leave by a back door. But Yaxley-Lennon recorded himself speaking to camera inside and outside the courthouse, describing the defendants as ‘Muslim child rapists’ in a video published online. 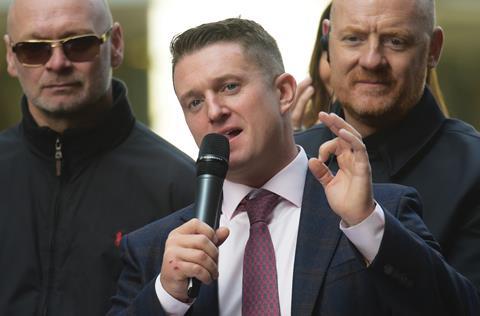 Judge Norton, who was hearing the case, found Yaxley-Lennon in contempt of court. She agreed to suspend a three-month prison sentence, warning him that it would be activated if he prejudiced any other pending trial by asserting that the defendants were guilty.

The judge’s finding was wrongly recorded as a conviction for criminal offence. But, said the Court of Appeal in August, this was an error of form rather than substance and Yaxley-Lennon was not prejudiced by other procedural errors.

A year after his warning at Canterbury, Yaxley-Lennon stood outside Leeds Crown Court and livestreamed himself, on Facebook, speaking about a trial which could not at that stage be reported. A total of 29 men had been sent for trial accused of raping and sexually exploiting girls as young as 11 in Huddersfield.

Because there were so many defendants, the court had ordered three separate trials. To avoid prejudicing the second and third juries, none of the proceedings could be reported until the third trial ended last month. At that point, we heard that 20 men had been convicted. The ringleader, Amere Singh Dhaliwal, was sentenced to life imprisonment with a minimum of 18 years.

Yaxley-Lennon’s live stream was broadcast while the jury in the second trial was considering its verdict. It appears to show him confronting defendants as they arrived at court. He referred to charges that the prosecution had dropped and of which the jury was unaware.

Yaxley-Lennon will have been advised that overlapping restrictions in this area are immensely difficult to understand, even for judges

Judge Marson QC, who was hearing all three cases, was concerned that this might derail the current trial and prejudice the one that had yet to start. Yaxley-Lennon agreed to delete his video from Facebook. A lawyer was found to represent him and, later that same day, Marson found him in contempt. If Yaxley-Lennon had not admitted his guilt, the sentence would have been 15 months. The judge reduced it to 10 months and activated the three months that had been suspended in Canterbury.

Unfortunately, if understandably, Marson acted too hastily. Once the video had been deleted from Facebook, he could have adjourned the case for a few days — as Norton had done — or asked the attorney general to consider bringing contempt proceedings instead. That would have avoided the procedural and other errors that led to unfairness. Yaxley-Lennon’s appeal was allowed, he was released after serving 10 weeks and a rehearing was ordered before the recorder of London, Judge Hilliard QC. The Court of Appeal invited the attorney general to nominate an ‘advocate’ for the new hearing, stressing that the case should be ‘presented by someone other than a judge’.

But, once again, things went wrong. The attorney nominated an ‘advocate to the court’ — what we used to call an amicus. Under arrangements agreed in 2001, an advocate to the court is not allowed to lead evidence or cross-examine witnesses. So the advocate, Angus McCullough QC, was unable to do what the appeal judges envisaged or what Hilliard needed.

Whose fault was that? McCullough pointed out that the Court of Appeal could have referred the case to the attorney general — which is what it said Marson should have done.

Hilliard had initially thought he could decide the contempt case himself, with McCullough’s assistance. But Yaxley-Lennon’s counsel argued that the case should be referred to the attorney general, Geoffrey Cox QC MP, for a decision on whether to proceed. Because Yaxley-Lennon was now denying that his video was prejudicial — and so could expect cross-examination — Hilliard agreed. Unless Cox is persuaded to drop the case, it will be argued in full before a Queen’s Bench divisional court.

An unusual aspect of this case is that Yaxley-Lennon paid the solicitors Kingsley Napley to train him in contempt law. He will have been advised that overlapping restrictions in this area are immensely difficult to understand, even for judges. But he believes he kept within them.

In his witness statement, Yaxley-Lennon argued that instead of restricting media reports ahead of a trial we should trust juries to try cases on the evidence presented to them. I have argued the same myself in the past. But until the law is changed, I try to observe it. That was why uncomprehending critics — particularly in the US — had to be kept in the dark until the three Leeds trials had concluded.